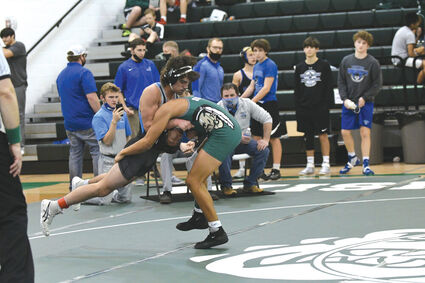 Dive in • Jesus Hernandez, of Schuyler, searches for leverage against Summerland's Alex Thiele, during a match at the Wisner-Pilger junior varsity meet, Monday. Thiele finished second in the 126 division.

The Bobcat junior varsity wrestling team tied for sixth, Monday, at the Wisner-Pilger Invite, accumulating 63 points in a field of a dozen teams.

Pierce tied with the Cats in the sixth-place spot.

Jesse Thiele finished first in the 120-pound class, finishing 5-0, with four wins by decision and one win by fall.

His lone loss was to Plainview...