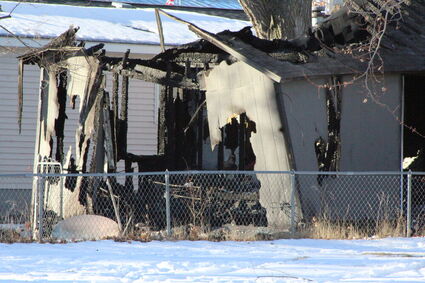 Total loss • Charred support beams and siding of a house located at 406 Iowa Street, in Clearwater, remain upright after a fire destroyed the house, early Monday morning. The home's owners, Jose and Jemima Mendoza, and children Melany and Israel, were not home when the fire started. Clearwater Fire and Rescue requested mutual aid from Ewing and Neligh fire departments.

Upon arrival, firefighters found the single-story home of the Jose and Jemima Mendoza family in flames.

The Mendozas were out of state at the time of the blaze. They returned to Clearwater on Monday.

Allemang said firefighters extinguished the blaze and left the scene at approximately 2:30 a.m.

The Nebraska State Fire Marshal's office is investigating the cause of the fire.

The family will move into another residence in Clearwater.

Clearwater Chamber of Commerce is collecting household items for the family, including bedding, furniture, kitchenware and laundry essentials.

Cash donations and gift cards for the family may be left at Hi-Way Mart.