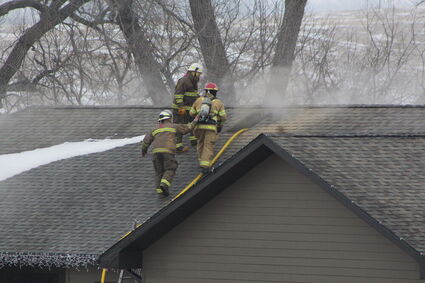 Members of Clearwater and Neligh volunteer fire departments examine damage caused by a fire at a Clearwater home, Wednesday afternoon.

Clearwater Volunteer Fire and Rescue Department responded to a fire call, Wednesday, at a home north of Clearwater.

According to information supplied by the Clearwater VFD, a motorist noticed smoke curling out of the home of Steven and Holly Thiele, located approximately three miles north of Clearwater, on 516 Avenue, around 2:55 and dialed 911 to report the fire.

The fire was contained to the garage. Fire department members cut holes in the home's roof to vent smoke...