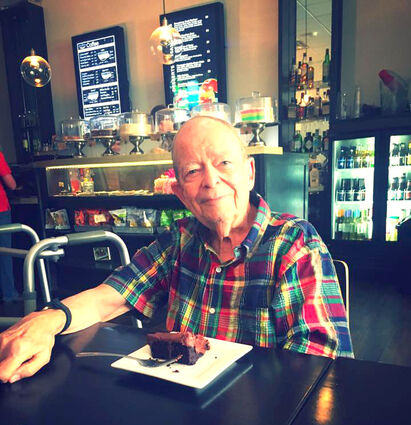 A memorial visitation service for Lamont Larson, 93, of Tilden, Nebraska, will be held Saturday, Jan. 9, from 3 to 5 p.m., at Peace United Church of Christ, in Tilden, with Pastor Melanie Miller officiating. Private graveside services at the Oakdale Cemetery, in Oakdale, Nebraska, will be held at a later date. Per Lamont's requests, visitors are asked to wear red or Husker apparel to the visitation.

Lamont Larson was born June 30, 1927, in Wausa, to Paul and Olga (Gropper) Larson. He graduated from Wausa High School in 1944. At that time, he was recognized by the Nebraska Department of Education for having perfect attendance throughout his school years in Wausa Public School. He also had perfect attendance, during that time, at Sunday school at Wausa's United Methodist Church. He continued his education at Norfolk Junior College and received a Bachelor of Arts degree in English and history education from Yankton College in Yankton, South Dakota. After graduation, he taught in Genoa, St. Edward and Meadow Grove.

Lamont married Barbara Fields, of Tilden, Aug. 5, 1956, at Peace Evangelical Church in Tilden. To this union, two daughters were born, LuAnn and Laurie. They also opened their home to a foster son, Rob Hamilton.

They moved to Clay Center in 1956, where they both taught in the Clay Center school system. During his tenure, he taught English, journalism and speech and also served as librarian and high school principal. Lamont directed play production and speech, with several play casts and speech students earning state medals. Lamont earned a Master's Degrees from Wayne State College and Chadron State College. In 1968, he was selected to at the University of North Carolina - Greensboro and the family spent the summer there.

Lamont served on various church committees and, for years, kept the score book for the Clay Center Wildcats basketball team. He served as Rainbow Dad of Harvard Assembly of International Order of Rainbow for Girls and was honored with the Grand Cross of Colors. He was a member of Midwest Lodge No. 317 A.F. & A.M., in Hastings.

For several years, Lamont and Barbara volunteered at Heartland Pet Connection, in Hastings.

In 1993, Lamont received a phone call that led to the discovery of the origin of the Larson Comic Book Collction, the third largest collection of Golden Age comic books. In 2005, Lamont was guest of honor at San Diego Comi-Con, meeting with collectors from across the United States.

Lamont and Barbara continued to make their home in Clay Center until 2006, when they moved to Tilden. From 2007 to 2009, Lamont came out of retirement to serve as assistant speech coach at Lutheran High Northeast, working alongside daughter, LuAnn, and Barbara. The team earned a district championship and fifth place finish at state.

He is preceded in death by his parents; wife, Barbara; and foster son, Rob.