Flyers on cruise control in contest against Bobcats 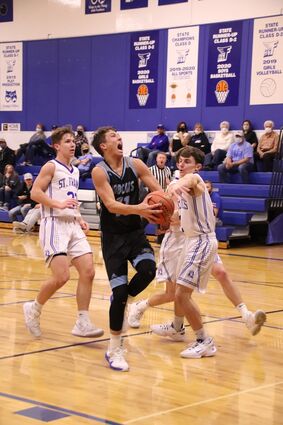 Hop to it • Mason Hoke drives across the lane for a layup against the Humphrey St. Francis defense. Hoke scored three points in the Dec. 17 contest, played in Humphrey. The Flyers took control early to pick up a 54-22 win against Summerland.

The Bobcats found themselves in a game against another tough opponent last Thursday, Dec. 17.

They lost a tough game, 54-22, against the Humphrey St. Francis Flyers.

The Flyers were able to grab a lead in the first quarter, but the Bobcats battled back and cut it to five.

The Flyers were able to take the lead in the first quarter, which they maintained and built upon the rest of the game.

A strong game plan, including the Flyers' extended 1-3-1 zone defense, dominated the narrative of the game and held the Bobcat offense in c...