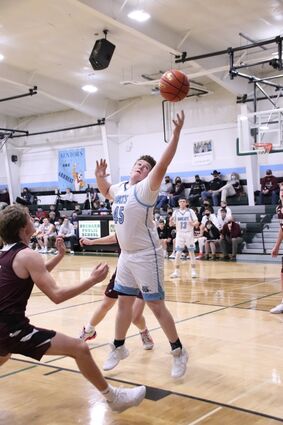 Stretch the line • Summerland's Joe Ahlers reaches for a pass and nabs it by the fingertips during a Dec. 15 game, in Orchard, against Stuart. Ahlers scored eight points and pulled down six rebounds in the Bobcats' 66-45 loss.

The Bobcats met a stout Stuart Broncos team on Tuesday, Dec.15, in Orchard.

They fell to the Broncos in a tough game, the final score was 66-45.

Levi Cronk led the way for the offense with 10 points.

The Bobcats were able to keep things close and, going into the second quarter they were only down eight.

Then, early in the second, the Bobcats went on a run and cut the lead to six, but the Broncos were able to hold them off and went into half-time with the lead.

The second half proved to be tougher yet as the Bobcats were unable to cut the Broncos lead back to single digits the rest of t...