Personal Essay: The house that built a family 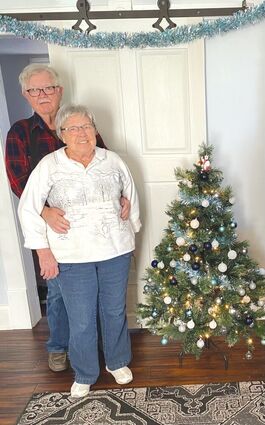 Home for the holidays • Jim and Gladys Fink, of Orchard, display a Christmas tree, donated by Glen and Tammy Cheatum. The Finks lost their home and all possessions in a Nov. 4 fire. Members of St. Peter Lutheran Church, in Orchard, donated the tree trimmings.

This August, I was extremely excited to get back to college and start making up for the memories lost during the pandemic at my first year of college.

The day before I left, I went to tell my grandparents goodbye. My grandpa Jim Fink, 81, hugged me extra tight as he joked about staying away from boys. Then my grandma Gladys, 87, followed me out the door, gave me multiple hugs, as tears began to roll off her cheeks.

"I just hope you know how proud your grandpa and I are of you."

While both my parents worked, my grandparents watched me from the time I was a baby until I became old enough to get involved with extracurricular activities after school. They always made their house feel like a home to anyone who stopped in, including neighbors, people from the community, family and friends.

On the evening of Nov. 4, the unthinkable happened to our family.

Around 10:30 p.m., my grandparents prepared themselves for bed, just as they did every night.

My grandpa smelled something hot.

By the grace of God, they got the instinct to get up and check things out. Grandpa walked toward the kitchen, while Grandma scoped out the living room.

"I began to get dizzy and I knew I was going to fall in if I didn't get out of there," Grandma said.

Meanwhile, Grandpa was in the living room trying to call 911, but due to the fire being electrical, he couldn't get the landline phone to work. A passerby called 911.

Luckily, the couple made it outside safely, leaving their entire household behind.

My grandparents' neighbor, Lou Nelson, took them out of the cold and into her home.

"I met Gladys many years ago. We worked together and I learned a lot about cooking from her. Then we became neighbors 18 years ago. We were there for each other in times of need, and oftentimes, we would just sit outside and visit. My three granddaughters always hung out with them. There were always good treats and wisdom. Jim and Gladys are the best neighbors you could ask for," stated Lou.

Lou was a huge helping hand that night and multiple days after the fire, as well. Several fire departments were called for mutual aid, and it took nearly an hour to put the fire out.

Marlene Hurtig allowed my grandparents to spend a couple of days with her. The next morning, I drove from Wayne to see the damage. Grandpa had lived in this home almost his entire life. He raised his two children John Fink, of Columbus, and Jane Fink, of Tilden, in this house and created several memories with their grandchildren and great-grandchildren.

Right upon my arrival, Marlene offered to drive them to Norfolk to get new glasses and some immediate items, as almost everything in the house was unsalvageable.

I rode along to provide comfort to my grandparents. I remember my grandma telling the lady at the eye doctor what had happened, and the lady stated, "In times of tragedy like this, you really find out who loves you."

Grandma rubbed my grandpa's arm when she glanced at me and said, "Oh, we have no problem with that."

When we returned from Norfolk, there were so many people in front of the house, offering to help and donate whatever they could. Honestly, it was truly amazing to see how many people came together from Orchard and several surrounding communities to help.

I glanced at the tiny handprints in the sidewalk, that happened to be mine, from 2011 when I thought of her lyrics of Miranda Lambert's song, "The House that Built Me."

"But those handprints on the front steps are mine."

The entire time I stood in front of their home, it felt like a movie of memories was playing in my head. I remember Grandpa playing the guitar and singing "You are my Sunshine" to me daily. I recall beating Grandma and my cousin Stormy in some pretty close games of dominoes and kings on the corner, and my routine Dr. Pepper and nachos after school with my best friend, Ashley Williams.

By the weekend of Nov. 7 and 8, we moved my grandparents into a new home in Orchard. My sister-in-law, Desirae Schwager, and I grabbed a few quick items to give them a starting point, at least with the cooking supplies.

Within hours, people began donating furniture, dishes, money and practically everything they needed to start over.

In times like these, I couldn't even imagine living someplace else when people were so quick to help. It has been about a month and a half since the fire, and they are getting back to their normal everyday life.

"We lost most of our stuff, but we will always have the memories. That's what matters the most," stated Grandma.

This is the second house fire Grandma has been in during her lifetime. Her family's home burnt to the ground in 1946 when she was only 13 years old.

As the days go by, I think more and more about that day I told them goodbye for college.

I thank God every day for getting them out of the fire safely, and for the opportunity to be able to say ... Grandpa and Grandma, I'm pretty proud of you two, too.