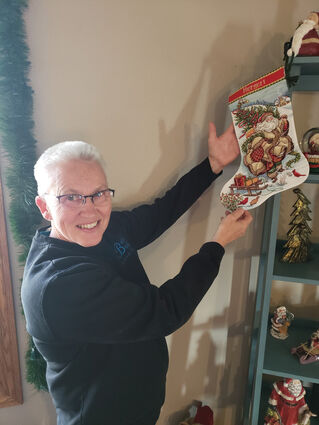 The stockings were hung by the chimney with care • Terri Hergert, of Royal, shows a personalized Christmas stocking featuring Santa Claus. Each of her 10 grandchildren have a Santa-themed cross stitched Christmas stocking. Hergert has been collecting Father Christmas items for a number of years.

Santa Claus must feel especially jolly whenever he is coming to town and climbs down the chimney of Terri Hergert's Royal home to deliver Christmas presents.

That is because Hergert has a collection of Kris Kringle items that would make Santa's rosy cheeks blush as red as his iconic suit.

"It's the make-believe, magical part of Christmas," Hergert said. "I just have always liked Santas."

She has been a fan of the white-bearded, white-haired Father Christmas ever since she was a child growing up near Orchard.

"Every Christmas morning, we had Santa gifts under the tree," Hergert said. "It was...