Summerland falls short in close game on the road 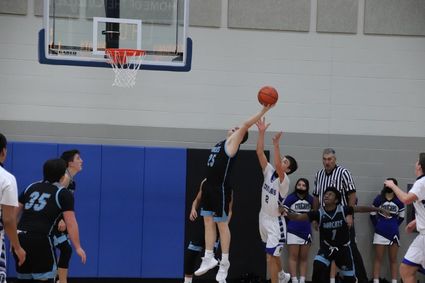 Fishing for the ball • Dillon Moser reels in a rebound with his fingertips, avoiding a collision by an unidentified Cougar player. Jaykwon Petite watches the action. Moser scored six points in the Bobcats' Friday night loss to Niobrara-Verdigre.

In a close contest from start to finish, the Bobcats ultimately came up short against the Niobrara-Verdigre Cougars in a game decided by only one point, with a final score, 49-48. The teams met Friday in Niobrara.

Offensively, the Bobcats were led by Dalton Rotherham with 13 points.

The Cougars jumped out to an early lead and held on to it until the end of the first quarter. A great second quarter by the Bobcats sent then into the locker room with a two-point lead, 41-39.

In the second half, the Bobcats continued the good offense and held onto a two-point lead going into the fourth.