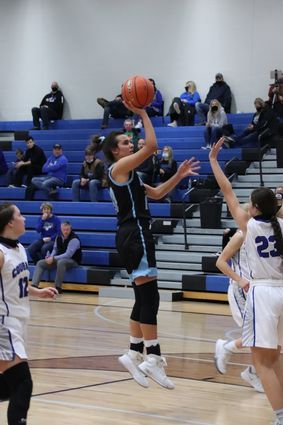 One-shot wonder • Brenna Wagner sends a one-handed shot to the bucket during Friday's game against Niobrara-Verdigre.

In an intense game against the Niobrara-Veridgre Cougars, the Lady Bobcats were able to come away with a 58-51 win.

The first quarter was neck and neck the whole way, with the Lady Bobcats ahead with a six-point edge, but in the second quarter, the Cougars were able to take the lead back and go into the half up two, with the score at 32-30.

The Lady Bobcats came back sharper in the third quarter and were able to build another six-point lead and take that momentum into the fourth, up 46-49.