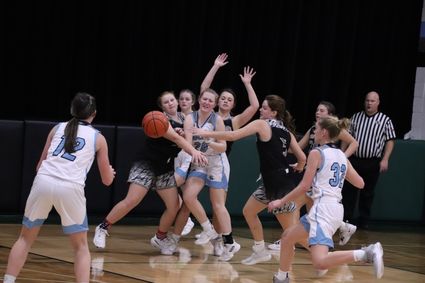 Sandwiched in • Spartan defenders swarm Maryssa Long during the Lady Bobcats Saturday evening game against Boyd County. Summerland walked away with a win, 49-37.

The Lady Bobcats put in a strong performance, making nine three-pointers, in a game they won, 49-3,7 against the Boyd County Spartans this weekend.

They were led offensively by Avery Cheatum and Adyson Mlnarik, who both contributed 11 points.

The Lady Bobcats started the game slow in a close first quarter but were able to stretch the lead with good offense in the second quarter.

During the second half, the Lady Bobcats were able to hold onto the lead behind precise shooting from deep court.

The Lady Bobcats secured this win before an upcoming week of two tough opponents, Stuart and Humph...