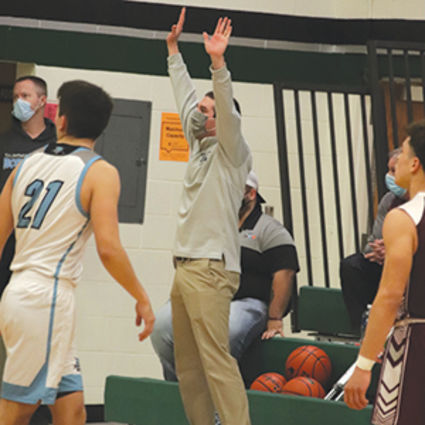 Coach Jacob Birch reacts to a bucket during the team's season opener. The Bobcats lost to Neligh-Oakdale, 47-27.

The Bobcats opened the season at home, in Clearwater, against the Neligh-Oakdale Warriors in fast-paced tough contest, with a final score of 47-27.

Mason Hoke and Keegan Smith lead the Bobcats in scoring, with six each in the Dec. 3 contest.

Neligh-Oakdale took the lead in the first quarter, at 14-6, and held on to the lead the rest of the game.

Both teams played strong defense and kept the scoring low the first 32 minutes of the contest, until both teams poured in a combined 31 points in a quick fourth quarter.

Kellen Mlnarik lead the way for the Bobcats on the glass with nine rebounds...