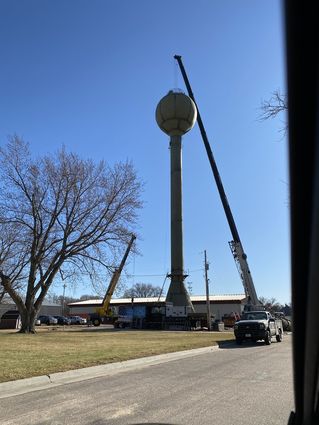 Ewing's new water tower went vertical, Monday, by employees of MRL Crane Service and Equipment Rental, of Grand Island. Three members of the crew worked inside the tube while a crane operator lowered the tank into place. Construction on the project began in early September. Painting and lettering will not be completed until spring. Ewing Village Board of Trustees approved white paint with black serif letters measuring 51 inches in height. The new tower is located north of the Ewing fire hall. The old water tower, originally installed in 1908, was purchased from the Spittler Brothers, for $3...