Move allows school to "build toward success" during uncertain times 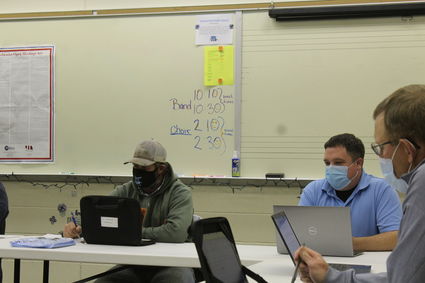 Decision • (l-r) Jeremy Wagner listens as Nate Schwager discusses the rationale for maintaining three principal positions during Monday's special board of education meeting in Ewing. Board members voted to adopt a reduction-in-force policy, for one full-time equivalency, beginning in the 2022-23 school year.

Five instructors in the Summerland district have indicated they will participate in the early retirement incentive program.

The announcement was made Monday, in Ewing, during a special meeting, which lasted approximately 52 minutes.

Superintendent Dale Martin announced last week he would submit a letter of resignation to take the incentive. Clearwater instructor Bonnie Wies and Ewing educators Ed Johnson, Jan Miller and Barb Roland will also retire at the end of the school year.

Martin said he expected the teachers to submit formal letters of resignation to the board.