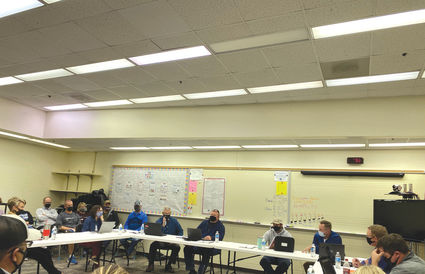 Discussion • After an executive session which lasted nearly two hours, Monday, Summerland Board of Education President Ed Nordby announced a decision regarding administration staffing was tabled.

After listening to public input on potential administrative staffing and engaging in an executive session which lasted approximately two hours, Summerland Board of Education President Ed Nordby announced discussion and any impending vote on the matter would be tabled.

The decision came toward the end of Monday's monthly board meeting, held in Ewing. Approximately 50 district patrons waited to hear the decision.

In a phone interview, Tuesday, Martin said he had spoken with all three principals about the recommendation he was scheduled to present to the board on Monday.