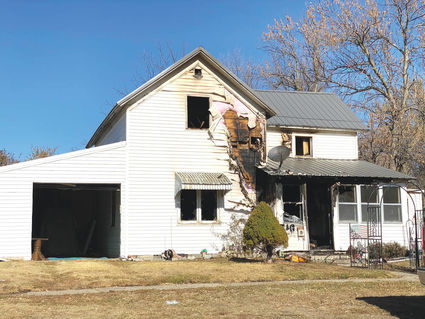 Unsalvageable • The Jim and Gladys Fink residence, at 405 East 3rd Street, in Orchard, is considered a total loss, after a fire swept through the house, Wednesday. Orchard Fire and Rescue Department, along with the Royal Fire Department, responded to the call. A fund for the Finks has been established at the Bank of Orchard.

A Wednesday evening fire leaves an Orchard couple homeless after their residence, located at 405 E. 3rd Street, was destroyed.

The residents, Jim and Gladys Fink, were able to escape from the blaze.

A mutual aid call was issued for departments from Brunswick, Ewing, Neligh and O'Neill.

The Nebraska State Fire Marshal assisted at the scene.

Preliminary investigations indicate an electrical problem to be the likely culprit for igniting the fire, according to Risinger.

A fund for the Finks has been established at the Bank of Orchard.

The couple has relocated to a residence in Orchard.

According to the Finks' grandson, Nate Schwager, furniture and food donations have been received and monetary donations are appreciated.