Fate of KXL appeal in hands of board of adjustment 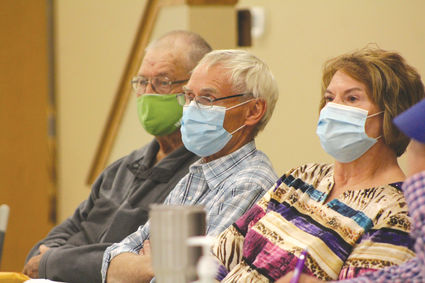 Decision time • (l-r): Holt County Board of Adjustment members Butch Goeke, Jim Hubel and Barb Steskal listen to testimony from individuals during an Oct. 29 appeal hearing on TC Energy's concstruction permit. The board will reconvene Nov. 5, in O'Neill, to approve or deny the appeal.

A decision on an appeal regarding TC Energy's application for a pipeline construction permit in Holt County will wait a little longer.

Following nearly 3 and one-half hours of testimony by 60 individuals during a public hearing Oct. 29, at O'Neill's community center, the Holt County board of adjustment recessed until Thursday, Nov. 5, at 2 p.m.

In February, Holt County supervisors voted to deny the permit, until conditions laid out by the county planning commission, are met.

In denying the permit, supervisors agreed with Holt County's zoning and planning commission, that TC Energy must have easements to all property involved and all private drain tiles would be identified.

Patrick Pepper, a TC Energy attorney with the Omaha law firm MacGrath North, requested board of adjustment members to approve the appeal for two reasons.

"At the time of application, we did have possession of property."

"Private drain tile, as contrasted with culverts, ditches and waterways, is not identifiable unless the owner of the private drain tile tells you where it is. To read the words private drain tile into an ordinance that doesn't say that would read an impossibility into that ordinance. We don't think that's correct, under Nebraska law, an interpretation can be given to a word to make the ordinance literally impossible to comply with," Pepper said.

TC Energy submitted two pieces of information with its application, including a detailed plan if the company encounters drain tile during Construction. The plan states the company will avoid, move around or replace any private drain tile.

Individuals wishing to address the board of adjustment were able to sign up one hour prior to the start of the hearing. Individuals unable to attend were allowed to submit written testimony, which was read on record.

"All landowners have not signed, and not all drain tiles have been identified," Kopecky said.

Jeanne Crumly, of Page, in a submitted letter read during the hearing, asked that the voice of the citizens not simply be listened to, but heard. Crumly said Holt County residents, in general, are trusting people.

"We know that in many cases our word is our bond. We build fences with our neighbors by verbal agreement. We make land leases and agreements by our verbal commitment. If someone has abused our trust, they have often lost a partner for life. When we attach that business arrangement with TransCanada, or whatever their most recent name is, they abused our relationship and cannot be trusted, not by landowners and not by you," Crumly said.

"Their business model seems to be to buy the politician, write the laws and legislation, court the local officials, make lofty promises, throw out a few T-shirts and bulldoze the landowner. We are definitely the obstacle, not the partner."

Other area residents voiced concerns about the company using eminent domain, the accuracy of environmental impact studies and setback rules.

Steve Rokahr, of Page, told board members about a time he took part in a pipeline cleanup, in Idaho, after a farmer nicked the pipe with a chisel plow.

According to Rokahr, the pipe was under 3,000 pounds of pressure. Within 20 minutes, approximately 160 acres of ground were soaked with oil.

"I physically dug the pipeline down to six foot for five miles, across that plain, and the amount of residue left over ... was just amazing. That piece of ground was not worth anything anymore," he said. "If it happens, man, it doesn't take any time at all. It's not if it happens, it's when it happens."

"Why are we here then? This is a tar-sands pipeline, supposedly," she said.

Byron Steskal, of Atkinson, said the route of the proposed pipeline has changed three times, with the mainline alternative route, being approved by Nebraska's Supreme Court.

Steskal said. "Landowners on the MAR route had never been notified, no environmental impact study was done. It's still in litigation, along with condemnation in Holt County."

He noted TC Energy has filed an appeal on land appraisals set by county officials.

"We have not received any money or signed any papers in this condemnation action," he said.

According to Steskal, the pipeline route crosses 61 center pivots in Holt County.

"What does TC think? We'll irrigate half a quarter during construction and dryland farm the other half? Yeah, right," Steskal said.

Jim Powers, a TC Energy attorney, reminded the board its job was not to decide if the pipeline is a good or bad idea.

"The Nebraska Public Service Commission was given that task," he said. "Your job is to determine if the denial of the construction permit was correct. It's a narrow question before you. Did the board of supervisors err on denying the permit?"

Pepper said the company negotiated a vast number of easements and some were the result of condemnation.

Jeremy Stevens, a board member, asked what measures the company took to identify drain tiles.

Pepper said TC Energy attempted to talk to landowners and drain tiles have been identified on a map of the county.

"We have satisfied the county board and will continue to supplement information," Powers added.

"That exemplifies we do have rights to the property and access as required," he said. "I cannot emphasize this enough, it's not up to you to decide if the pipeline is a good or bad idea. That's not what you have in front of you.

Board of adjustment member Barb Steskal told Powers she appreciated the narrowness of scope.

"But as TransCanada trying to be a neighbor, do you have any input into the concerns and unanswered questions yet?" she asked.

Powers said the same concerns were presented to the Public Service Commission.

"I think all the issues have been dealt with and TransCanada is very serious about them and they've made every effort they can," he said.