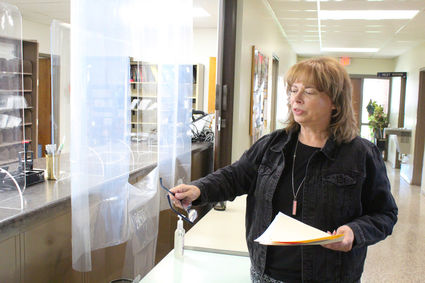 Safety concerns • Antelope County Treasurer Deb Branstiter talks about the need for security windows on the front of her office inside the courthouse in Neligh. The security windows would help protect her and her staff from sick and upset patrons.

Antelope County is looking into improving courthouse security to better protect its employees.

County treasurer Deb Branstiter spoke to the board of commissioners Tuesday, Oct. 13, about purchasing and installing new security windows and related items for various offices inside the courthouse in Neligh.

"I recently traveled to Cedar County and Knox County," Branstiter said. "In June, I called six different contractors and got varying responses."

Representatives from Glass Edge Inc. of Norfolk have visited the Antelope County Courthouse and made some recommendations.

During a visit to the Cedar County Courthouse, Branstiter inspected the security windows for that treasurer's office."I actually measured Cedar County's – they have the same-sized window as I do," Branstiter said. "Glass Edge said that they had just put up a solid piece of glass and it worked well for Cedar County."

She noted Cedar County Treasurer Jean Wiebelhaus was not entirely happy with her office's security windows.

"She feels it should be supported more," Branstiter said. "It's open at the top, even though they have their gate down. They can't open their gate."

In addition to Cedar County, she showed the commissioners photos of security windows at the treasurer's office inside the Knox County Courthouse in Center.

"Both examples kind of tried to use what they had and improved upon it, which is what we want to do," Branstiter said.

She noted the Knox County Treasurer's Office's security windows are made of bulletproof glass.

Branstiter mentioned more about the setup of the Cedar County Treasurer's Office.

"Their counter comes out past that little bit of wall on each side," Branstiter said. "Ours does not."

She has spoken to Aaron Kinnan of Kinnan Construction near Oakdale about a potential project for the Antelope County Treasurer's Office.

"Aaron was talking about building a wall so that we can have a counter on the other side of the glass," Branstiter said.

She noted the front ledge of the counter for customers to use at the Cedar County Treasurer's Office is not that large.

"When customers write their checks, their faces are hitting the glass," Branstiter said. "In Aaron's estimate - $36,091.99 - he is building the counter out a little bit so it gives the customer room for paperwork."

She has spoken to Antelope County Clerk Lisa Payne about having new security windows installed for various offices inside the courthouse.

"I believe Lisa and I are on the same Page as far as the big piece of glass with two supports in the middle," Branstiter said.

"I want something that's going to be safe for our office," Mueller-Oltjenbruns said. "That's why I've requested the bulletproof glass."

Branstiter noted many county offices are usually busy with customers during the hours they are open.

Branstiter emphasized she and her staff need to be able to communicate clearly with their customers.

"We need to be able to talk to them," she said. "That's why I do not want the closed-off bulletproof glass."

Branstiter wants herself and her office workers to be protected from germs – especially with the ongoing coronavirus pandemic – and upset patrons.

"We need the sound to travel through easily," Branstiter said. "Just from what we have set up right now, it's hard to hear customers.

"I know it's going to be a little bit of a challenge to hear the customers, so that's why I want it open at the top and open underneath," she said.

She recommended the security windows that would be installed inside the courthouse have a cohesive look, but each county office gets what it requests.

Branstiter recalled when Glass Edge representatives traveled to Neligh and visited the courthouse.

"We went around to the different offices," Branstiter said. "The Extension office didn't want anything. They felt what they had was fine."

She noted district court clerk Angie Mortensen has to be able to let people into her office.

"What she would like is a door of some sort that she can stop the customers – like those split doors where you can open the top and then the bottom stays shut and there's a little ledge," Branstiter said. "If she wants to let them in, she can."

She mentioned what county zoning administrator Liz Doerr would want for her office.

"Liz would like some sort of window so she could see who's coming down the steps and decide if she wants to let them in or not," Branstiter said.

"We do have an issue with that her wall and her door are fire-rated," she said. "We just have to work with the fire marshal when we do something for her."

She noted another request many county officials have was keypad locks for their doors.

Kinnan was the only contractor who submitted an estimate for how much the installation of security windows and other work could potentially cost.

"He is willing to work nights and weekends so that we're not disrupting our business," Branstiter said.

"He's done a good job for us in the past on stuff," board chair Charlie Henery said.

Branstiter noted visiting the courthouses in Cedar and Knox counties has aided her in her research of security windows.

"The best way to know what you want is to ask the people that have it, and that's been the most helpful for me," she said.

The commissioners asked Branstiter to talk to Kinnan about attending one of their upcoming meetings to share safety and feasibility ideas.

"We need the sound to pass through," Branstiter said. "That's my big concern, and that's why I want it open at the top, open at the bottom, and just the strong glass."

She noted during the ongoing coronavirus pandemic is as good a time as any for new security windows to be installed for the courthouse offices that want them.