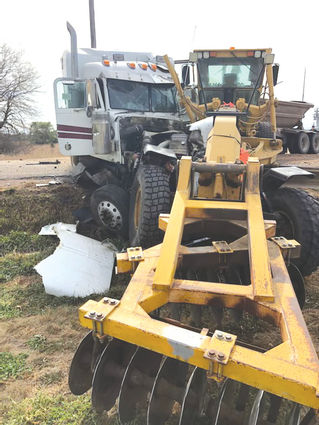 Crash • A semi-tractor-trailer and an Antelope County road grader land in a ditch, following a Wednesday collision at the intersection of 512 Avenue and Summerland Road.

A multi-vehicle accident, involving an Antelope County motor grader and a tractor-trailer, owned by Spud Trucking, LLC, of Clearwater, occurred Wednesday at the intersection of 512 Avenue and Summerland Road, in rural Antelope County.

Ray Schlecht, of Clearwater, was driving the county grader on 512 Avenue, while the semi, driven by Derek Snodgrass, of Neligh, was traveling along Summerland Road, although the direction of travel is unclear.

Clearwater Volunteer Fire and Rescue Department responded to the scene and transported Schlecht.

The extent of Schlecht's injuries are unknown.

"Everybody is okay and that's the best thing that can happen," said Antelope County road boss, Aaron Boggs.

The damage amount to the grader, remains unknown.

He estimated between $50,000 and $75,000 for the cost of a new grader, if the current grader cannot be repaired, adding, "It will depend on estimates."