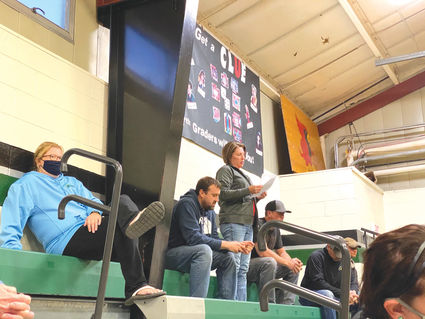 Are masks giving people a false sense of security?

The question was posed to Summerland School Board of Education members during its Oct. 12 meeting in Clearwater.

During public participation, three district patrons offered comments, asking questions about the school mandate, which requires students in all grades to wear masks during the school day.

The mandate went into effect Sept. 28.

Sara Lemburg asked the board to be "objective and practical."

She acknowledged COVID-19 is a dangerous virus.

"It isn't the first and it won't be the last, which makes how we handle it all the more important to do this right and not get caught up in the hype," she said.

Lemburg, and her husband, Curtis, would like to see the district devise a plan specific to this location.

High-efficiency particulate air filters or purifiers could be placed in classrooms, according to Lemburg.

She said she emailed data about mask effectiveness to administration and board members Oct. 5.

"Unless it went in my junk email folder, I did not get a response back from anyone acknowledging receipt of the information," she said.

Superintendent Dale Martin noted the email had been received.

Lemburg said she hopes the district is more transparent in the future.

"I feel the mask-wearing changes were very sudden, and little to no information was given after indicating how long our kids would have to wear masks during the day, outside, during lunch, if they get breaks. None of that was explained," she said. "I also would like to know why the school deviated from the original color-coded dial to implement change .... know if there's a Plan B or C, or what we, as parents, can possibly expect, if things change."

Dustin Wright, of Ewing, asked if the school is following health department recommendations so the district "doesn't get sued."

Wright wants in-person classes to continue, noting, "If we have to wear a mask, I'll accept wearing a mask, but at what point are we going to stand up and ask what's going on?"

Wright said he reached out to parents, who report students are sucking on masks.

"They're in a room for four hours. Do you really think the mask is doing anything at that point? Five minutes after school, what are we teaching our kids? They're licking each other three minutes after they walk out of the school. I've watched it," he said.

"Our kids are not getting sick. Take them off our kids," he said. It's a parent's decision to wear a mask. Let's take a stand."

Mask-on-mask gives the school the best opportunity for staying in school.

He said, "We want to educate kids face to face."

According to Martin, the health department has the legal right to tell a school district if students need to isolate or quarantine.

"We want to keep kids in school," Martin said, adding he would not debate the effectiveness of masks. "There's research on both sides."

Board member Steven Thiele said he feels strongly about following the recommendations of experts.

"In this case, it's the health department. I feel to this point we've done a good job of it."

Nate Schwager expressed disappointment in the way the mandate was approached.

"I felt we had a plan in place, everybody had it. We switched without any notification to the parents."

He said he addressed the situation with Martin.

Schwager said breaks from mask usage need to be built into the daily schedule, offering examples of having physical education classes outside or social distancing in classrooms, especially those with small enrollment.

"That's the advantage of having three buildings right now. We've got 130 kids in each building," he said.

"I'm sorry there wasn't any better notification but when you think of safety, when you think what the school lawyer is telling you, safety is a priority over communicating it to the best. That's always hard to do anyway," she said.

Wright expressed concerns about how masks may affect young learners.

Nordby acknowledged the change took place overnight, noting the board felt they needed to act.

"We're getting info from the health department once a week, but generally, we felt we needed to act because things were trending upward in two, if not all three, of our schools."

According to Nordby, health department mandates say if both parties are wearing a mask and one turns up positive, the individual who tests positive is sent home. Everyone else gets to stay.

"If one party is wearing a mask and the others aren't, everybody gets to go home," Nordby said.

Lemburg asked if the board questions information distributed by the health department.

Nordby said COVID-19 issues were discussed since March by the separate school boards, and continued with the formation of the Summerland.

"We're not going at it willy-nilly. We do take the health department directives with high regard because they're the ones who can come in and tell us, 'You're done. Your kids aren't going to be in school.'"

Anson asked if NCDHD can make the recommendation or if they can shut down a school.

NCDHD can quarantine and isolate groups of kids based on contact tracing.

"They do have a legal right to do that," Martin said.

The superintendent said the decision to shut down the school, made in March, was a school decision, based on information and discussion among area schools and the health district.

No new action was taken on the district's mask policy.

In other business, the board:

• voted to designate Oct. 28 as a professional work day. Educators will learn about best practices for remote learning, in addition to work on curriculum; and