A honey of a harvest 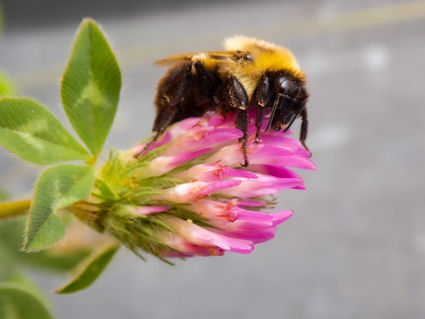 The honeybee’s contribution to humankind is worth it’s weight in gold, liquid gold. References to beekeeping have been found near Spain in archaic cave paintings, hieroglyphics in an Egyptian temple and at an Israeli archeological excavation, where an ancient apiary was uncovered, containing over 100 straw and clay hives. But it wasn’t until the early 1600s that European settlers introduced bees and beekeeping to the New England colonies.

The immigrant honeybee that makes the Americas it’s home is Apis mellifera, commonly called the European honeybee. Beekeeping, or apiculture, is the care and management of bees for the purpose of harvesting honey. In the United States there are approximately three million apiaries. An apiary is a collection of hives and their location is referred to as a bee yard.

John Damme, a retired carpenter, has more than 50 years experience as a beekeeper, apiarist, and started because he wanted a snowmobile. “Gene Patras had bees and we all wanted to do snowmobiles and he was the only guy who could afford one so I went and bought some bees,” chuckled Damme.

Early in his apiary endeavor, Damme and his family would transported hives to Texas, near Livingston, for the winter months. During the 1980s and 1990s Damme produced honey commercially and at one time had over 1,500 hives.

“They make honey a lot earlier in the spring and later in the fall…and the big push to fill up your hive before you come home is the Rattan vine and it goes up those big old pine trees to the top. It’s a really hard flow, they can usually fill up your hive then you load them up and head for Nebraska,” said Damme.

There he met other beekeepers who “took me under their wing,” related Damme. They increased his knowledge and a few became long-time friends. In 2013, Judy Fleissner, an oncology nurse, joined Damme and together they operate J & J Apiaries, located in Clearwater. They manage more than 300 hives in the surrounding area.

The hive hierarchy consists of a queen, stinger-less males called drones and female worker bees. The queen’s sole purpose is to lay eggs and she will fly up to three miles to mate with multiple drones from other colonies. According to Damme, “She is really just a slave. The queen will only lay when they feed her.” The workers build cells in two sizes. A larger cell will prompt the queen to lay an unfertilized egg which will develop into a drone and, in a smaller cell, she will lay a fertilized egg that will become a worker. “When that queen lays four frames of brood, when the brood hatches she’ll lay eight frames of brood and when that hatches she’ll lay 16 frames of brood, then you have a full blown beehive. The queen can lay up to five years and she can lay up to 2500 eggs a day,” explained Damme.

The drones’ sole purpose is to mate with queens. As winter arrives, the drones are removed from the hive by the workers and left to die in the cold. The workers are the bees that keep the hive humming, with tasks including queen care, nursery aide, hive security, food forager and evictor.

This year, busy as a bee describes Fleissner and Damme as they harvest a honey of a haul. “Last year’s frequent showers throughout summer washed the nectar from the flowers but the rains this July were ideal,” explained Fleissner. “White sweet clover, or yellow sweet clover too, is the best there is. Out where we put the bees at Chambers this year, we pulled off 200 pounds of white sweet clover (honey) then loaded them up and took them out to Foxley’s and put them on the organic beans and they’re full again,” observed Damme.

When a worker discovers a food source, she returns to the hive and communicates the size, distance and quality using dance-like movements. Her sisters, following the directions, gather the nectar and store it within the hive’s honeycombs.

The hexagonal cells are constructed of beeswax and propolis which allow for moisture evaporation, ripening the nectar into honey. The honey’s color and flavor is determined by the flower from which the nectar is gathered. The harvest usually begins in late summer.

“They have (found) honey in the tombs in Egypt that was still good,” noted Damme.

Honey is more than just a simple sugar because it contains vitamins, minerals and other nutrients. Crystalization can occur, but when warmed in hot water, it will return to liquid. Honey should not be given to children under the age of 18 months.

Honeybees play an important role in agriculture as pollinators of a wide variety of domesticated plants. Today’s beekeepers are a valuable tool for farmers, providing pollination service for more than 90 commercially grown crops. J & J Apiaries bees aid in the production of the famed Lambert melons.

Early this spring, Fleissner and Damme experienced to what is known as colony collapse disorder.

CCD is an unexplained phenomenon when the queen and her workers mysteriously abandon the hive. The cause of CCD is still unknown although researchers have noted a decrease in the number of cases reported in recent years.

This spring, Fleissner and Damme were able to purchase three frames of brood and a laying queen from Texas to graft into the hives.

What started out as way to obtain a snowmobile has become more than a hobby for Fleissner and Damme. Together with their apiarian co-workers, they provide a service for local farmers and supply area residents with a sustainable cupboard staple.

Fleissner said, “Our honey can be purchased at Clearwater Market, Hi-Way Mart, Ewing Family Foods, TJ’s Market or directly from our home.”

As September’s National Honey Month flies by, the bees and their keepers continue to supply a food that has been shared amongst people for thousands of years.

jelly, honeycomb and honey. Each of these

substances maintain and sustain the colony and the hive. Beeswax, secreted by the female

workers, and propolis, a plant resin, are building

materials used within the hive. Propolis is

from honey and pollen, is also fed

to the larvae while Royal jelly and

Honeycomb is used as a

The life stages of a honeybee are egg, larva,

pupa and adult. The eggs hatch in three days

and then develop into larvae. The nurse bees first feed the larvae Royal jelly and later they’re weaned to a mixture called bee bread. Larvae that are destined to be queens are still fed Royal jelly. About five days later, the worker bees seal the larvae’s cells. They will immediately spin a cocoon, becoming pupae. Within 12 days, the pupae transform into adults. The queen bees are the first to surface from the nursery cells and will fight until only one remains. The female workers and the male drones emerge a few days

later. Honeybees reproduce, not only by

producing more bees, but also by

minister and avid bee hobbyist from

Pennsylvania, built a wooden hive based

on his observation that bees wouldn’t build a comb in a space tighter than one centimeter, 3/8 of an inch. He invented the hanging

bar hive with removable frames that are

still the most popular hives for

Gracious words are a honeycomb, sweet to the soul and healing to the bones.