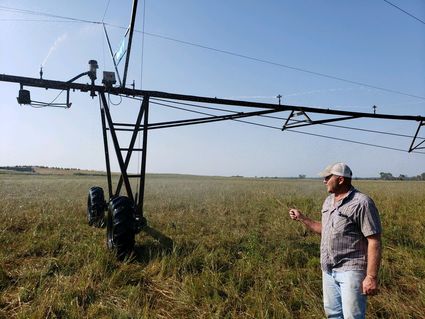 Water source • The mostly dry weather during the past couple of months has taken a toll on beef producer Curt Thiele's center pivot irrigation system in the Clearwater area.

Antelope and Holt counties have been dealing with mostly dry weather for the past two months.

"Abnormal dryness extended northward for both," said Nebraska State Climatologist Martha Shulski, who is based at the University of Nebraska-Lincoln. "These areas missed out on rainfall that hit other parts of Nebraska the past few weeks."

The dryness in Antelope County started in early August and in Holt County in early September.

"This part of the state did not have the strong pr...