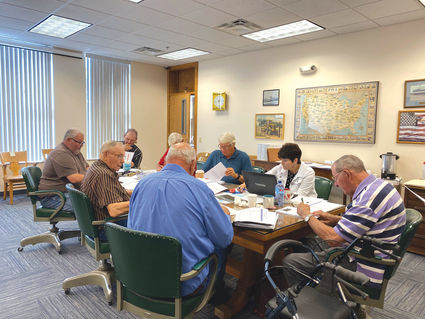 To include $2.5 million, monies promised by TC Energy for a road-use agreement, or not to include that amount in the upcoming road and bridge budget, dominated more than an hour of discussion.

Without payment in hand, the proposed levy would cost taxpayers an additional eight pennies, jumping to 36.25 cents, a 31% increase.

In the end, supervisors agreed to pursue a $1.5 bond to defray a larger levy increase.

“Do we pretend we might get money from TransCanada or do we want to start cutting?” Holt County Clerk Cathy Pavel asked supervisors. “We can’t raise our (road and bridge) budget as much as 31%. You just have to give me some guidance.”

Steve Boshart told fellow supervisors they should either figure the check will be in the mail or the county will go on without it.

“It’s going to be all or none so that basically leaves you to start cutting,” he said.

Chairman Bill Tielke asked where cuts could be made to maintain or keep any increase to a minimum.

“When we had the town halls, the people said, ‘Whatever you do, keep improving the roads,’” Tielke said.

Multiple projects are already in motion, according to Connot, with funding dependent on this year’s budget.

“Most is disaster-related,” he said. “Last winter, when we talked about our one- and six-year plan, we were pretty heavy on repair projects, that’s what a bulk of the increase is for.”

Large projects, including the Stuart-Naper Bridge, are included in the road and bridge budget. Approximately 1.48 million pounds of concrete will be removed. The structural steel and reinforcing steel weighs approximately 438,905 pounds.

The project cost will be divided between Holt and Boyd counties. Holt County’s out-of-pocket expense is expected to total approximately $1 million.

“There’s some leeway there (in the budget), but the major expenses, they’re already projects that have been washed out a couple of times since the spring flood,” Connot said.

“Again, you just have to hope we get it,” she said.

Boshart said he believes TC Energy will pay the county.

“You just don’t know when it will be,” he said. “When will they get their permit? If that’s one month. It could be two years.”

Supervisor Don Butterfield questioned if other department budgets should be cut.

“If you went back and cut everybody’s budgets, you might be talking $75,000,” Tielke said.

Boshart asked how funds received later in the fiscal year will affect the budget.

The budget will not need adjustment if funds are received.

“When we spend money, we have to amend the budget. If we got this money in, it would just be money in our account ... there wouldn’t be as much tax-asking, in a perfect world, for the next budget year,” Pavel said.

“Hypothetically, you could go up to 36 and a half cents this year, and if you get the check, you could go down to 28,” Boshart said.

Pavel agreed, adding, “But it would have to wait until next year.”

Supervisor Robert Snyder expressed concern with the number of paved roads in the county and cost of upkeep.

“Pretty soon, it’ll mean de-paving them, I mean, I don’t know if taxpayers will go for that,” he said. “Maintenance is terrible (expensivie).”

Connot said $500,000 is listed in the building accrual line, but “I don’t have any estimates that are concrete.”

Pavel said in 2019, the county was approved for $8 million in bond funds for flood damage. Currently, $5.5 million has been used. Interest on the bond runs 1.5%.

The bond was originally set up to fix roads without costing taxpayers, according to Tielke.

“Instead of raising our mill levy, we should borrow the money on our bond and maybe raise our levy only 2% or 3%, instead up going up 31%. When the FEMA income comes, then we can pay off the bond, instead of making our taxpayers stand it all,” Butterfield said. “Most of it (the increase) is just on FEMA.”

Pavel responded, “If we borrow $2.5 million and increase revenue $2.5 million, we’d probably be right in there. If we put the entire $2.5 million in, saying it is FEMA money, we might be able to even eliminate any increase in the levy.”

“I think taxpayers would be more happy with that than trying to raise their taxes,” Butterfield noted.

Tielke agreed. “We’d be able to continue to keep our road improvements, which we need.”

Pavel said she could inquire whether repayments could be delayed for a year since “we’ll be in the midst of paying the $5.5 million back.”

“You guys haven’t seen valuations drop like you will in the next year or two years. They’re going to go down a bunch,” he said. “There’s nothing to hold the value up. There’s too much input.”

“Part of the reason Gary had to go up so much on some of these projects is beyond his control,” he said.

“I don’t want to borrow money, but we’re to the place right now, we didn’t really ask for this. The taxpayer didn’t ask for it,” Butterfield said.

Supervisors spoke with Mike Pommer, a Wakefield certified public account who works with the county, via speaker phone about how a bond would affect the levy.

“If you do $1.5 million, it would erase about five cents of the levy increase,” Pommer said. “The whole $2.5 million would be pretty close to taking you down to where it wouldn’t go up at all.”

The overall levy would sit at 31.8 cents, with 2.5 cents for bond repayment.

“The general levy is only coming up 2.5 cents,” Pommer said.

In other business, supervisors:

• approved a change order from Beckenhauer Construction, Inc., in the amount of $2,202, to apply shark grip additive to paint on the fire escape steps and landing;

• read and finalized bids for construction of grading and channel repair on 12 EWP project sites; and

• accepted a road study report from the county highway superintendent on his recommendation of the use of the public road Section 11 & 12, Township 30, Range 11, in regard to a road closing petition. A public hearing will be held Sept. 30, at 10:30 a.m.