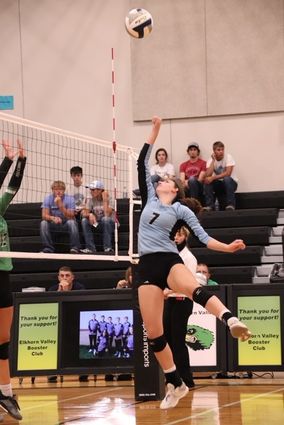 Surprise attack • Kyra Nilson dumps the ball across the net during a game against Elkhorn Valley, Thursday, in Tilden.

The Lady Bobcats brought their "A" game to the season opener.

The ace game, that is, sent Summerland to a 2-0 start after winning the Elkhorn Valley triangular.

After EV downed West Holt in straight sets, the Lady Cats sent the Huskies packing, sweeping the match 25-15 and 25-18.