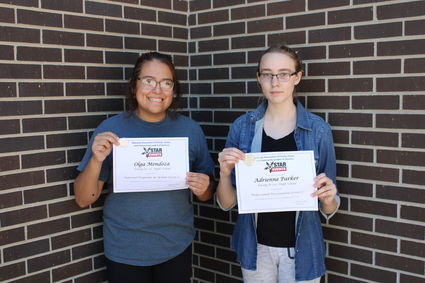 Family, Career and Community Leaders of America members, chapters and advisers were recently recognized via social media platforms for their efforts during the 2019-2020 school year.

This year, more than 700 students from across the state earned the opportunity to compete in STAR Events at the State Leadership Conference. Students Taking Action with Recognition recognizes members for proficiency and achievement in chapter and individual projects, leadership skills, and career preparation. Due to the cancellation of the conference, scores from each of the 12 district competitions were used and had a standard deviation applied to them to determine the state champions and state runners-up.

The Ewing High School FCCLA Chapter earned recognition for various chapter awards. Based on work in the categories of leadership, membership, promoting FCCLA and competitive events/programs, Ewing FCCLA was awarded the Bronze Chapter Award. The chapter was also recognized as an applicant for the Student Body National Program Award for the week in November spent educating students about the negative effects of vaping. The chapter also presented lessons to elementary classes about the importance of saving, which they were recognized for as an applicant for the Financial Fitness National Program Award. Ewing FCCLA also received accolades for being a new chapter in the state as well as earning the 7-Up Membership Award for increasing chapter membership by seven members.

Chelsey Greene, Ewing Jr./Sr. High School FCCLA adviser, was the recipient of the Nebraska Master Adviser Award which recognizes advisers who have been successful in advising an affiliated chapter for a minimum of three years Her application will be forwarded to the national association for award consideration at the national level. She was also a recipient of the Nebraska Adviser Committed to Excellence Award for going above and beyond to support the needs of the chapter.