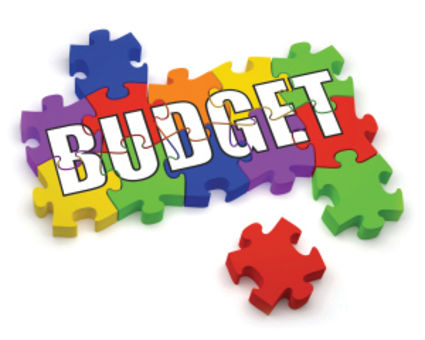 As the 2020-2021 fiscal year neared its second month, Antelope County leaders started their annual budget work with a special workshop meeting last week at the courthouse in Neligh.

The budget must be submitted to the state by Sept. 20, with a public hearing required prior to its adoption. Although values won't be certified until later in the month, Assessor Kelly Meuller-Oltjenbruns has unofficially reported about a 3% decrease in valuation countywide.

Commissioners reviewed department's preliminary wish lists and heard testimony from several elected and appointed officials who chose to defend or explain their requests. Among preliminary budget requests questioned were two of three that included sizable increases, the new clerk of the district court, Angela Mortensen, and county sheriff Bob Moore.

No action was taken, and the commissioners will continue work on the budget at upcoming meetings, in preparation for annual hearings next month.

With just over $15,000 of a $20,000 budget spent last year, the zoning office budget request remained unchanged.

"In my office, sometimes it's kind of hard to predict if there's going to be a big project coming or not. This year, it's been slower, so I haven't spent near my budget, so I just left it the same just in case something changes," zoning administrator Liz Doerr said. "Hopefully there's room in there so if somebody else goes over."

Veteran service officer Tom Nelson's budget request was up about 1.7%, to $38,569, including about a 3% salary increase. He explained claims for veterans were up, but he intended to keep the county benefit amount to the $20,000 set by the board. He said he had seven claims in the first two months of the fiscal year, with one of the county claims amounting to $9,000.

Due to Covid-19 restrictions, training and related travel budgets were not all used, resulting in several offices finishing the year under budget. However, most of them proposed increases in personnel costs.

County clerk Lisa Payne, whose clerk's budget was not totally expended last year, said, "I didn't use all my budget last year because I didn't have an employee for six months of the year, that will not happen this year."

Deb Branstitter's treasurer office budget request showed a similar condition, a 2.4% overall increase, to $161,163, including a budgeted wage increase, just shy of four grand. In addition, she anticipates an increase in mandated training in the coming year.

"Next year, the Legislature is mandating training for treasurers. It's going to be very intense next year. Nebraska Associaton of County Officials already jumped on it and already had it planned for us," she said. "The bill hasn't passed yet, but we are planning on four major trainings next year."

Kelly Mueller-Oltjenbruns, who was not present at the workshop, submitted an overall assessor office budget request that was lower than the previous year by about $2,000, overall, although it includes a modest 0.7% personnel expense increase.

"She was doing a lot of microfilming last year," Payne said. "She said she would reduce it after she got done with that."

Commissioner Dean Smith questioned Mortensen on her plans regarding the $10,000 increase.

"We discovered that there is equipment we are lacking, that we are required to have by the Supreme Court," Mortensen said, listing $500 for a document camera and $700 for a laptop computer.

"There are other things that have to be purchased to be able to hook those devices to the computer system so that they can be shown on the TV screen," she said. "That's all minimum requirements for courtrooms in order to be able to keep our courtroom. If we are not advancing our technology, then they're talking consolidation."

She also budgeted for microfilming.

County attorney Joe Abler's $110,143 request was unchanged except for a 1.5% increase in wage expense.

The weed department budget request, including a 1% personnel expense increase, was up overall by 3.3% to $110,600.

Although a preliminary budget for the road department was included in the document reviewed by commissioners, road superintendent Aaron Boggs was not present, and the department budget was not addressed during the meeting.

Commissioner Regina Krebs said, "I talked to him (Boggs) just a little bit, we are still kind of fine tuning, as far as line items, between what needs to be budgeted out of regular funds, versus where we're sitting at for the additional expenditures for the bond revenues."

The department's preliminary budget submission included an overall increase of more than half a million dollars, for a total of more than $5.4 million.

As the commissioners waited for Moore to arrive, commissioner carolyn pedersen began an explanation, on his behalf, of a requested increase of nearly $100,000 for salaries,

"We pay two people to do our job basically and gave them a pretty nice increase," she began. "At that point, I told everybody that the sheriff's office is training people and sending them on down the way...We are not paying them an amount that will keep them here...I was told, 'put it in the budget'... Bob's wish list was to give his employees a raise."

Smith reminded his peers that most other counties do not offer a full family insurance benefit, adding that reasons for leaving may not be pay.

Krebs said employees could be further ahead without full family coverage, due to provisions in the Affordable Care Act.

"The wages that we are talking about for the dispatchers, the ACA with subsidies would be much better deal than full family benefit," Krebs said.

Smith reacted with a suggestion to consider discontinuing family coverage, "for future employees, as Madison County did many years ago."

Smith asked if it was going to be an issue of road department versus sheriff's issues.

"That is not an issue. That is the profession the person has chosen," he said. "If they want to work in the road department, they work there, if they want to become a deputy sheriff, that's a decision they make."

Pedersen said, "I believe dispatch is a very important thing, you need to know that when you call 911 you are going to have somebody there who is capable of handling that. Bob has a wonderful excellent staff, they are trained."

Krebs added, "My understanding is we are short staffed by probably one employee over there and as we look at moving forward, especially with the 'TC Canada' situation I think we need to consider bringing the 911 system, the dispatch system, up to full staff."

When Moore arrived, he also pleaded his cause:

"I lost three employees last year that took all our training to another jail and dispatch center because they paid more, way more, and they are adjoining counties. I lost Tim Schultz to Cuming County (because) they offered him way more money than what we were paying, after I sent him to school...I've been patient, when I started as sheriff, my overnight girls were making $8.25 an hour, 10 years ago.

"John Shaver went 12 years with the Antelope County sheriff's office, making $19 an hour. I just encourage you call Holt, call Madison, call Boone, call Pierce, and see what their 12-year officers are making. They are all over $20 an hour. To just say they knew what they were signing up for, the bottom line was that we were hoping to move to that, like the other ones around us."

Krebs asked him about upgrades to the jail security technology, saying she did not see it in the sheriff's department budget.

"It just depends, I got some rock stars Dean, and I got some that aren't quite there yet," Moore answered.

Commissioner chairman Charlie Henery asked if staff would be evaluated. Moore said it already had been. He said not all will get a raise, while some already had.

"We were able to work that out of the other budget last year," he said. "We did that, so the overnight girls have already gotten a raise."

The conversation then turned to revenue from housing prisoners for other jurisdictions. Smith asked and was told by Moore he charges the other counties $40 per day, while paying $50 per day to Platte County to house Antelope County prisoners.

"We cannot be housing other prisoners for less than what it costs us to house elsewhere, that (doesn't) even make sense," Smith said.

"Because we won't have anybody. I have explained this to you guys before," Moore said.

Moore said he started at $50 per day, but got no takers, due to transportation distances.

After hearing from Payne that the "2940" budget proposed by Moore includes a $100,000 interfund transfer, Smith suggested the transfer be increased to $300,000. When the comment drew resistance, he said he will take it up when it comes time to set the levy.

A final item of contention between the two officials was Moore's plan to obtain a drug dog, with deputy Shelby Keetle, who resides in Elgin, as the handler.

The Elgin city council had amended its dog ordinance to allow prohibited dogs which are used for law enforcement purposes or as service dogs, to be exempt after Moore approached the city. "The change was made to accommodate a drug dog for the Antelope County Sheriff's department to be kept inside the city limits," according to a March 13 article published in the Elgin Reveiw.

"Where is the expense for the purchasing of the dog?" Smith asked. "Is that listed in here (budget)?"

Moore said, "We are working with the wind towers, TransCanada and donations."

Krebs announced expenses and donations will still need to be budgeted. Moore agreed to give the numbers to Payne to input.

Moore replied to a comment made by Smith regarding controversary over the county's last dog that was put down after Moore took office, "I was thrown under the bus by a (previous) commissioner and a former deputy that made it sound like that the dog was shot and burnt on a garbage pile and that's where all that controversy come from, not from the Antelope County sheriff's office."

He said he had contacted the Nebraska State Patrol first and followed protocol for euthanizing the animal, which was done by a veterinarian.

Henery asked Smith if he was against the dog or the expense of a dog, Smith answered the expense.

"Don't you think the dog will be a benefit?" Henery asked.

"I have no idea," Smith answered.

"I am here to tell you that right there, that's the comment, he has no idea," Moore said. "We're getting beat up by the public about getting on top of this meth problem in this county, which is evident, it's over the top...meth is in just little packages and that dog can smell that. We can't see that. There're stops going on that they are driving off with it."