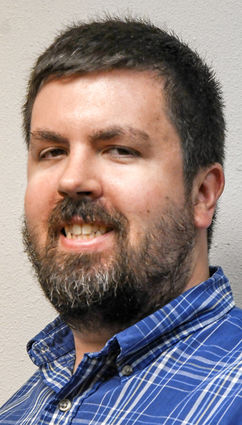 Mark Mahoney, an Omaha native and University of Nebraska-Lincoln graduate, will cover the Antelope County Commissioners and general beat articles.

Originally a biochemistry major, Mahoney realized science wasn't for him after taking a 100-level biochemistry class aimed at weeding out people from that program.

"I looked at other possible majors and I realized I was a good writer, so I considered English and journalism for a bachelor's degree. I thought journalism was a better career path for me and I never looked back," he said.

Mahoney is no stranger to rural, community journalism.

He wrote for the Daily Nebraskan from 2004 to 2006, starting as a sports reporter before becoming a news reporter.

Most recently, he worked as a staff writer and photographer for The N'West Iowa REVIEW, the flagship publication of Iowa Information Publishers and Printers. The Review is the largest weekly newspaper in Iowa, covering a rural, four-county region in the northwest corner of the state.

Mahoney also reported for The Sheldon Mail-Sun and other publications, published by Iowa Information.

He said, "I was drawn to community journalism because I enjoy telling people's stories and getting to know the people I interview."

"That means a lot to me. I like to establish a good rapport with the people I meet and interview."

"Many times those same people will provide me with story ideas and tips down the road. I've learned that people appreciate good reporting, especially at the local level," he said.

Prior to that, he started his career writing for The Voice News, in Hickman. The weekly newspaper covers more than 20 southeast Nebraska communities.

Mahoney was named Outstanding Young Journalist in 2010, by the Nebraska Press Association.

He has won awards from the NPA, as well as the Iowa Newspaper Association.

Co-publisher Scott Schindler said the addition of Mahoney will add yet another strong voice to the Advocate-Messenger.

"Mark is a committed journalist, with a strong set of ethics," Schindler said. "He will bring another layer of strong reporting from Summerland communities."

Mahoney said he is happy to join the SAM staff.

"I look forward to getting to know the people in the newspaper's coverage area and learning more about the region. I'm an Omaha native who has come to appreciate small-town living and community journalism," he said.

Mahoney resides in Bloomfield, along with his wife, Christina and nine-month old daughter.