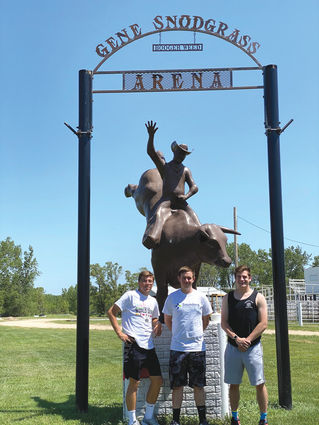 Visit 531 Jack McGonigal, Seth Varner and Austin Schneider visit the Clearwater rodeo grounds, June 17. Varner and Schneider are on a mission to visit all 531 towns in the state.

A quest to visit all 531 incorporated towns in Nebraska has turned into a geography lesson for residents of the state.

University of Nebraska-Omaha college students Seth Varner and Austin Schneider, of Wahoo, got the idea after college classes moved to online learning in March, when the coronavirus pandemic curbed traditional learning and sent college students back home for the semester.

The statewide road trip is similar to a venture Varner took with his dad nearly a decade ago.

"We were going to find gravestones for my family because we were doing family tree stuff," Varner said.

Instead, he wanted to visit and discover more about the towns, so he highlighted, on a map, villages the family visited.

Like many mementos, the map was folded and tucked away, out of sight, out of mind.

"There's nothing to do except to lift (weights), play video games or work," Varner said.

Both have part-time jobs at a local fast-food restaurant.

With apprehension of boredom setting in, Varner approached Schneider and asked if he wanted to join him in visiting all Nebraska towns.

"Let's do it," Schneider responded.

The first point of interest: Ithica, located in Saunders County.

They know the final town they will highlight: Wahoo.

Since April 22, they've visited more than 299 communities, documenting each visit on the Visit531Nebraska Facebook Page. Occasionally, friends hop in for a day trip.

All trips lead back to Wahoo.

"It's just giant circles around the state," Varner said, noting the group would return to home base by 11 p.m., Wednesday.

A common theme among all stops: photographs near community signs. They utilize a five-foot tripod and set a 10-second timer on one of the phones to snap pictures.

Some photos include a pink Energizer bunny, a mascot of sorts, a reminder to keep exploring the state.

"We're just like the Energizer bunny. We just keep going and going and we never stop," Varner said.

On June 17, they traveled to Clearwater, Ewing, Orchard, Royal and Page, stopping in each town to capture photos of interest and document their visit.

In Page, they visited the base line monument and Page school bell tower. While in Royal, the visitors stopped by the former Zoo Nebraska office.

Bev Krutz, of Orchard, provided a tour of Orchard highlights, including stops at Jeff Shabram's Around the Horn card shop, The Rex and Orchard Fudge and Candy Shop. 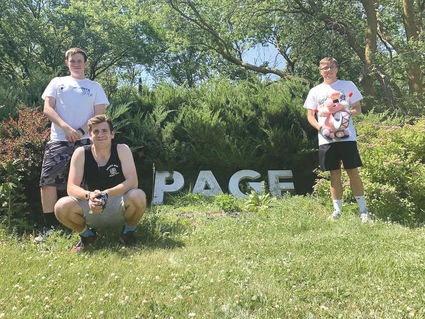 Historic sites dedicated to the Savidge Brothers were featured in photos from Ewing. While in Clearwater, the visitors stopped by the rodeo grounds, before taking a short break to cool down - and pick up new Nebraska road maps and visitors' guides.

Varner said they've discovered there is something to do and see in every town.

"You just have to go out and find it," he noted. "There's always someone available in a town to talk to."

Along the way, they've been greeted by area locals who have shared meals and souvenirs.

In one town, area residents held a parade, escorting the travelers down Main Street, fire truck sirens declaring the celebration, like when town heroes are welcomed home.

Varner and Schneider have taken health precautions while traveling during the pandemic. They've worn masks when passing through locations considered a hot spot and utilized hand sanitizer and wipes, if they exit the vehicle.

Varner and Schneider hope to finish the road trip by the time college begins in the fall.