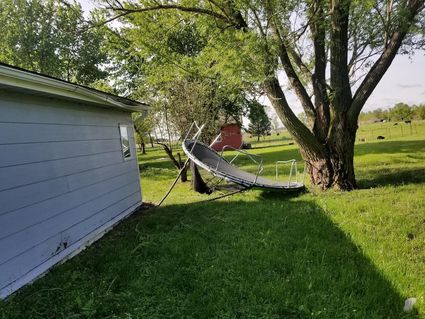 Eye of the storm • A smashed gutter and trampoline, along with toppled trees, remain after a Saturday evening thunderstorm passed through the area.

Strong winds caused damage to trees and structures in the Page and Ewing areas, Saturday night.

A line of heavy storms moved through the area overnight.

At the Richard and Courtney Soper residence, on the east edge of the village, a trampoline was thrown against the home's gutter, before landing near a tree in a crumpled mess.

Several Ewing residents reported tree damage, including trees being snapped in half.

At approximately 2 a.m., the Holt County 911 call center received reports of multiple trees down, according to a National...