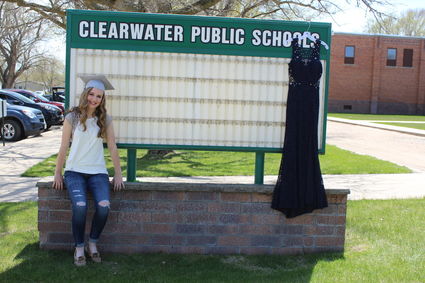 Dressed up, nowhere to go • Clearwater Public Schools senior, Kierra Bearinger, is disappointed about classic school activities seniors experience in springtime, including prom and graduation, being canceled. She looks forward to a rescheduled Close-Up trip in July and is "still hoping for a traditional graduation ceremony sometime this summer."

When Clearwater, Ewing and Orchard seniors went to school March 16, they did not know it would be the last time they attended school with their classmates.

The three school districts announced they would be closed, due to coronavirus concerns, for a two-week period beginning March 17. A week later, administrators announced the remainder of the school year would be completed at home, based on recommendations from local health officials, Nebraska Governor Pete Ricketts and Dr. Matt Blomstedt, commissioner of the Nebraska Department of Education.

The decision meant none of the usual springtime activities and celebrations would take place.

No Close Up trip to Washington, D.C. No music contest or spring performance. No district or state speech. No spring sports season. No prom.

The biggest concern: the final walk across the stage, diploma in hand, the ultimate rite of passage.

Kierra Bearinger, a Clearwater senior, said when the March 16 announcement was made, she was a little excited "for a two week 'vacation' from school."

The sentiment shifted a week later.

She said, "I was disappointed about the things we would miss out on, our senior year. We were getting to the exciting parts of senior year."

Bearinger acknowledges she feels sad she and her classmates will miss out on events. Many had already made purchases related to the activities, including prom dresses and graduation supplies.

"I will miss the craziness that went along with preparing for these events," she said.

The realization that this is it, this is the hand that's dealt, has left some students with a deep sense of loss. The grieving process does not change when you feel a part of life you used to control slip away to uncertainty. The silent loses aren't insignificant for the class of 2020.

"People have grieved not getting to finished their senior year," Bearinger said. "I think just accepting the fact we will not be going back to school has helped us come to terms with things."

She, like her classmates, still hope they will be able to travel to D.C. for the Close Up trip, which is tentatively rescheduled for July.

And, they still hold hope for a traditional graduation ceremony sometime this summer.

The proverbial clock is ticking.

"I think looking forward and thinking about these things has helped put a bright spot on this sad situation," she said. "I am glad we only had to miss a quarter of school. I cannot imagine if this outbreak would have happened first semester and not being able to attend any of our second semester."

On the homefront, Bearinger has been pleasantly surprised at the ease of adjustment to spending all day with her siblings.

"My siblings and I have actually gotten a long a lot better," she said.

Plus, there's been plenty of family time, which will change in the fall when she transitions into the role of college student.

Bearinger plans to attend the University of Nebraska-Lincoln, where she will major in elementary and early childhood education.

"We have done more family things together than we would have if we were running to activities all the time, like we normally do," she said.

One of the biggest takeaways, according to Bearinger, is not to take anything for granted.

She hopes members of the junior class have learned that lesson.

Years from now, when she has a family of her own, Bearinger plans to tell them the same thing.

"And if they complain about being home for one night, I will tell them the time we had to stay home for weeks, so one night won't kill them," she said.

Clifton was surpised when the Orchard school district took a two-week hiatus in March.

Then, when the decision to finish the school year at home was announced, he and his classmates didn't know what to think.

"It was confusing," he said. "I still don't know what to think about it."

Like other seniors, Clifton will miss several of the normal senior rituals.

Prom, not so much, he said.

Golf and graduation, though, will leave a void.

This year, the what-ifs will always be on Clifton's mind.

Clifton also wants an opportunity to walk across the stage and accept his diploma from Orchard High School.

"Hopefully, it happens," he said, adding with a chuckle, "They better not make us start over."

For some members of the class of 2020, confusion has segued into a new sense of normalcy.

Clifton isn't sure if a sense of sadness describes feelings associated with the abrupt end to his senior year.

He does know he misses seeing his friends and plans to spend time with them again, once some sense of normalcy returns.

Someday, when he tells stories about 2020 to his family, he wants them to understand the importance of not taking things for granted.

"Everything can be taken away fast," he said.

Next year, he plans to attend Southeast Community College and after receiving a degree there, transfer to UNL. He will study finance.

Surviving this bump in the road has been eased by family members and the community in which he lives.

"Everyone came together," he said. "Orchard is a strong community that made the best of it."

"Wow, this virus is kind of ruining a big part in my life right now."

That's the first thought Elizabeth Burival, a senior at Ewing Public Schools, had when administrators announced it would have a two-week break due to COVID-19.

She figured if the safety precautions would keep her, as well as classmates and teachers safe, "it wouldn't hurt anything."

And then, her senior year turned upside down.

"Once we got the message that we wouldn't be returning to school, I instantly just broke down into tears."

She thought her senior year was ruined. She was upset she would not get to experience things a "normal" senior would.

"It just broke my heart hearing that news."

When school officials reached out to class members and said they would have a proper ceremony and not forget about us, she felt a glimmer of hope.

There has been talk about a prom being held during summer months.

This year has a not-so-normal ending to a routine engrained in students' minds the past 13 years.

Ewing seniors will miss out on a breakfast with teachers, typically held a few days prior to graduation.

They will not have an opportunity to meet for the annual group photo for the yearbook.

And then, there's the traditional cap-and-gown walk with kindergarten students.

Class sponsors captured video of the class donned in caps and gowns, walking down the hallway, the last day school was in session in the building.

Burival said she is grateful for the time and dedication Ewing teachers put in to make sure they receive a "wonderful learning experience."

She misses her classmates, seeing friends and "actually getting to sit down with the teachers when I have a problem with homework."

Burival said she thinks everyone was grieving the loss of their senior year at first.

"Then we realized this is the safest way to keep everyone safe, so we've just gotten used to it." 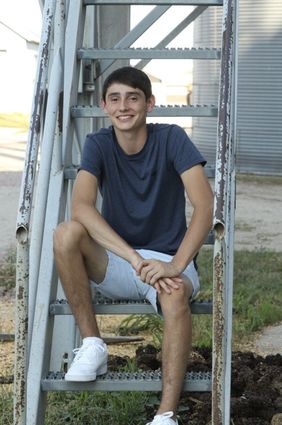 She also believes the community has gotten closer through the COVID-19 experience.

"We do everything different to try and keep people safe," she said.

Next year, Burival will be a nursing student at Northeast Community College.

Maybe she will use knowledge gained from this experience and put it into practice.

One thing is for sure, years from now, when family members ask about what living during COVID-19 times was like she knows what she will tell them.

"It was a hard time to get through, but I got through it."