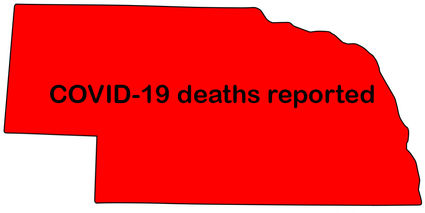 The first deaths in Nebraska, related to COVID-19, were reported Friday.

According to the Nebraska Department of Health and Human Services, a 50-year-old man from Douglas County, with underlying health concerns, is believed to be the first Nebraskan to die from COVID-19.

The man, who had been in self-isolation at home since March 11, had contact with a known COVID-19 case out of state.

Dr. Adi Pour, director of the Douglas County Health Department, expressed sympathy to the family and said, "The new disease has been in our community for only a short while, but those with co-morbidities are at a greater risk of complications."

The second death involved a Hall County resident, in her 60s, with underlying health conditions. The woman had been recently hospitalized

She was the third lab-confirmed case reported in the Central District Health Department area.

All identified close contacts of the woman will be notified, asked to self-quarantine and be actively monitored twice daily by CDHD for fever and respiratory symptoms.

"We have community spread of the COVID-19 virus at this time," said Teresa Anderson, CDHD health director. "CDHD is in communication with state officials in regard to issuing a state Directed Health Measure."

Gov. Pete Ricketts released the following statement Friday, "Susanne and I send our condolences to the families who lost their loved ones today. I encourage all Nebraskans to keep these families and all families impacted by coronavirus in their thoughts and prayers. This is a reminder for all of us to practice the 10-person rule, exercise good hygiene and to stay home if you're displaying flu-like symptoms."

As of 6 p.m., Friday, 89 positive cases have been reported in Nebraska. According to DHHS, 1,903 individuals have been tested and 1,809 have not tested positive, although that number does not include inconclusive test results.

Butler, Hall, Hamilton, Merrick, Polk, Seward and York counties are now included in the DHM, effective until May 6, unless renewed.

Four of the counties - York, Seward, Butler and Polk - are included in the DHM because they border counties with community spread.

On March 18, Ricketts issued the first DHM, which included Cass, Douglas and Sarpy counties, effective until at least April 30.

Dodge, Lancaster, Saunders and Washington counties were listed in the second DHM, ordered March 25. It will be in effect until at least May 6.

The DHMs impose limits of public gatherings and require restaurants and bars in these counties to close dining areas immediately. Businesses may offer takeout service, delivery and/or curbside service only until further notice.

Additionally, schools in these counties have been directed to operate without students in the buildings.

Social gatherings, including athletic events, concerts, funerals and weddings, are subject to the 10-person limit.

On Friday, Ricketts announced he signed an executive order to loosen licensing restrictions on doctors, allowing more to work in the state, if needed.

During a news conference, Ricketts said, "We have plenty of health care professionals to handle the current demand, but as we look down the road, we may see that we need more."