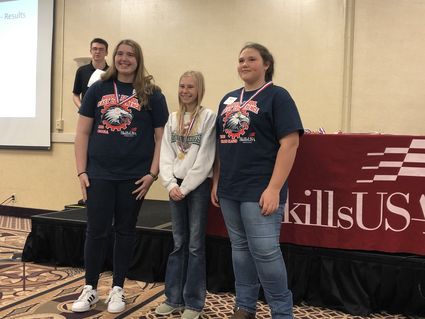 Qualifier • Carlee Livingston (middle), a member of the Clearwater/Orchard SkillsUSA Chapter, finished first in job skills demonstration at the Middle School SkillsUSA Conference last week. She will compete in the state leadership conference, in Grand Island, in April, for an opportunity to advance to national competition.

On Feb. 27, nine members of the Clearwater/Orchard SkillsUSA Chapter attended the middle school conference, in Grand Island, along with two of their sponsors, Amy Selting and Carrie Williamson.

The Clearwater/Orchard chapter had four students place in the top three of three different contests.