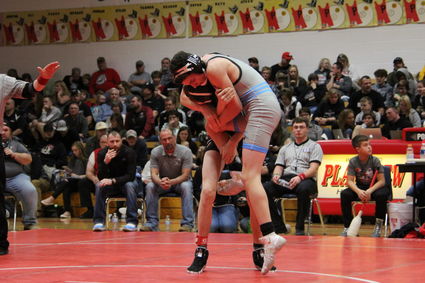 A leg up • Spencer Kester wraps a leg around Kirby Smith, to attempt a takedown, in opening-round district competition. Kester lost, by fall.

It was a meet of firsts.

And for the first time in Summerland history, two wrestlers will don the blue and silver singlets at the Nebraska School Activities Association State Wrestling Championships.

Colton Thiele and Rafe Grebin finished second and fourth, respectively, in their weight classes, to advance to this week's state party at the CHI Health Arena in Omaha.

The Bobcats ended 11th in a field of 20 teams in Class D District one competition, Friday and Saturday, in Plainview.