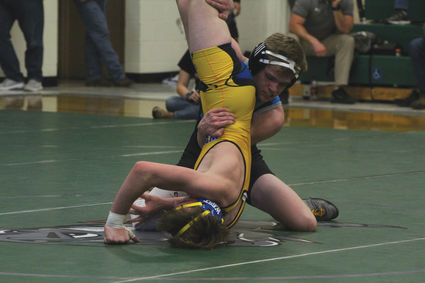 Upside down • Eli Thiele upends West Holt's Channing Ogden during a match at the Bobcat Invite, Friday, in Clearwater. Ogden claimed an 8-4 sudden victory during the third round match.

Howells-Dodge claimed the team title at the Bobcat Invite Friday.

The Jaguars scored 155.5 points to lead the field of 10 teams. West Point-Beemer finished second, with 139 points. North Central ended third, with 128.5 points, while the host team finished fourth with 113.

Grebin started the day with a win by fall, in :27, over Jazmine Murdock, SCW....