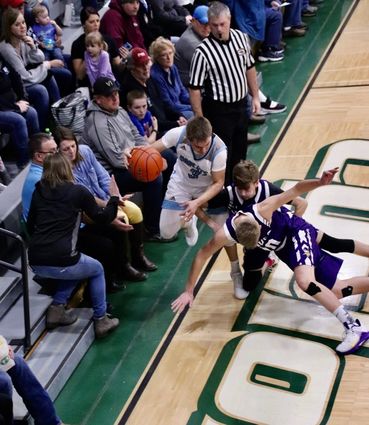 Crash course • Two Wausa defenders nudge Connor Napier toward the sideline of the court. Napier scored six points and is credited with five assists in the Bobcats' overtime win, Thursday.

After battling back to knot Thursday's contest with Wausa, the Summerland Bobcats remained focused, earning a 47-44 overtime win in Orchard.

The Vikings scored 17 points in the first quarter, holding the home team to 10, but the Bobcat defense limited Wausa to eight points in the second quarter.

But the second half belonged to the Bobcats.

Summerland scored 11 and 12 points in the third and fourth quarters, respectively, holding Wausa to seven in each of the quarters, forcing overtime with a 39-all tie at the end of regulation.