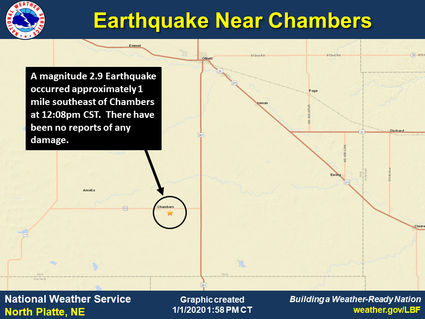 That's how many residents in the Chambers area described a New Year's Day earthquake that shook the Holt County village.

An earthquake registering 2.9 on the Richter scale occurred approximately one mile southeast of Chambers at 12:08 p.m. Wednesday.

According to the National Weather Service office in North Platte, the quake was approximately 5.5 miles deep and was considered a shallow quake in terms of depth.

Residents as far away as Inman reported hearing a noise around the time of the quake.

Reports of damage were not received by area officials.