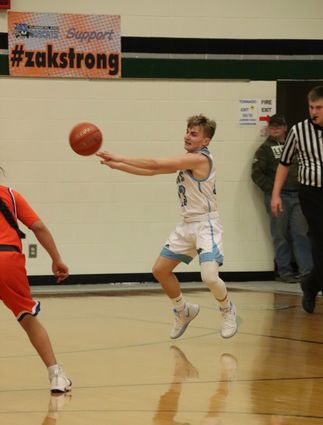 Dish it out • Summerland's Xavier Hobbs sends a pass to a teammate during opening round action of the Summerland Holiday Tournament. Hobbs scored 2 points in the Bobcats' 80-61 loss to Walthill. The Bobcats were scheduled to play Dec. 31, at 12:30, in the consolation game.

Walthill jumped to a 19-10 first quarter lead, Friday, against Summerland, and the Bobcats couldn't close the gap, dropping an 80-61 game in the opening round of the Summerland Holiday Tournament.

Turnovers continue to plague the Bobcats this season, as the local boys turned over the ball 27 times.

The Bobcats were set to play North Central, Dec. 31, at 12:30 p.m., in a consolation match that was postponed twice due to weather conditions.