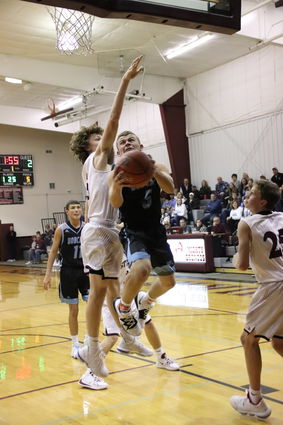 Interference • An unidentified Stuart player attempts to stop Summerland's Wyatt Wagner from sending the ball to the hoop. The Broncos downed the Bobcats, 48-39, Dec. 17.

Levi Cronk poured in 8 points and Gage Clifton pulled down half a dozen rebounds in the Bobcats 48-39 loss to Stuart, Dec. 17.

Summerland had several chances to take control of the game, but turnovers and personal fouls plagued the team.

The Bobcats finished with 39 turnovers and 30 personal fouls.

The host team held Summerland to 4 points in the first quarter, but the Bobcats clawed their way back into contention, tying the game at 18 apiece at the midway mark.

Summerland added 7 in the third quarter, but the Broncos nudged ahead, 30-25.

In the fourth quarter, the Bobcats scored 14 points...