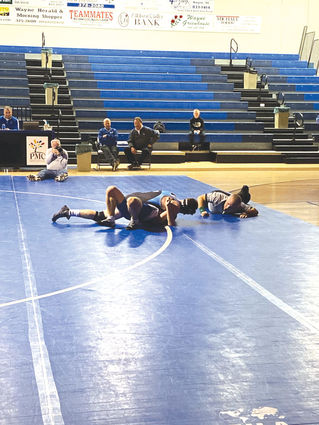 Pin to win • James Kester starts the Summerland wrestling season with a pin against a Wayne wrestler, during a triangular, Dec. 5, in Wayne.

The Bobcat wrestling team traveled to Wayne, Dec. 5, for a triangular with Wisner-Pilger and Wayne.

Eli Macke lost, by fall, in the 182-pound division and Colton Thiele lost a 10-2 major decision in the 220-pound class.

In the 285-pound division, Wyatt Chipps lost by fall.

Alex Thiele won the 120-pound division, while his brother, Eli, lost, by fall, in the 126-pound class.

Rafe Grebin picked up a pin at 132 pounds.