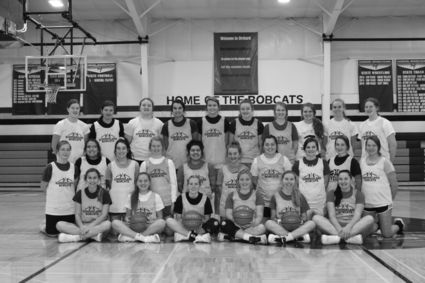 Summerland Head Coach Greg Appleby said the move to Class C2 will require the team to adjust its game.

"We will see more physical play, better athleticism and more man-to-man defense being played," Appleby said. "Monday night's exhibition game against Class C1 O'Neill was a good start for us.

The Bobcats outlasted the Eagles, 53-39.

On the opening day of the winter sports' season, 27 athletes reported for practice.

Appleby said the team's strength will stem from experience.

"I believe we will have added depth with the combination of the two teams. This will show in practice and in games and make us a better team."

The coach said the team has good length and athleticism.

"We will work to use this to our advantage," Appleby added.

With the exception of the Thanksgiving snow storm throwing a wrench in the daily routine, practices have been going well.

Appleby said, "Kids are working hard, developing team chemistry, and for a lot of them, they are learning a new system.

The jump to Class C2 will be interesting for the Bobcats, especially as the season winds down to subdistrict competition.

Perennial power Crofton will start the year as the number one or two team in C2 in the state.

Appleby said North Central will also be a top-five team.

North Central and CWC will be tough teams in conference play.

"We hope to improve and compete with these teams as the year progresses," Appleby said.