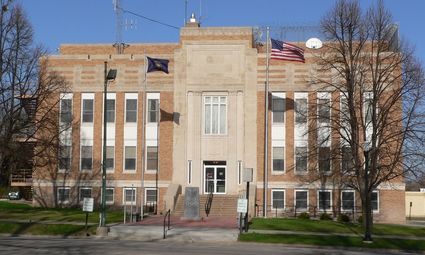 Timothy L. Robinson, 37, of Norfolk was sentenced to 120 days in the Holt County Jail by the Honorable Mark Kozisek on Monday. He was given credit for 36 days previously served.

Robinson was convicted of a Class 4 felony count of possession of a controlled substance Sept. 30, after reaching a plea agreement with Holt County attorney Brent Kelly. Terms of the plea deal included the prosecutor reducing a Class 2 felony charge of possession of a controlled substance with intent to deliver and an agreement to remain silent at sentencing.

A warrant was issued Jan. 22 for Robinson's arrest on the August 2018 offense, following an investigation that included search warrants executed at several O'Neill residences in December 2018, including 903 E. Douglas Street, where Robinson resided.

Jacob D. Anderson, 21, of Coos Bay, Oregon, was sentenced to 80 days in the Holt County Jail when he faced Kozisek in the district courtroom last Monday, Nov. 25.

Anderson, pursuant to a plea deal reached with Kelly, changed his plea to guilty of a Class 4 felony charge, theft - receiving stolen property, between $1,500 and $4,999. In return Kelly dismissed misdemeanor charges of no operator's license and false reporting and both parties agreed to a sentence recommendation of time already served. Anderson was also ordered to pay $137 costs of prosecution.

Anderson was remanded to the custody of Holt County sheriff Ben Matchett, pending collection of DNA sample and further hold on outstanding warrants.

The case stemmed from an accident reported in the O'Neill Subway parking lot Sept. 6. The investigation revealed a red Ford 150 pickup, driven by Anderson, had been stolen in Plainview. Anderson admitted to the theft of as many as five vehicles during the previous three months, including a utility all-terrain vehicle in Randolph that was recovered in Plainview, and vehicles in Oregon, Utah and Wisconsin.

A plea deal was reached, with the felony count reduced to third-degree domestic assault, a Class 1 misdemeanor. Kelly dismissed counts II and III and Vanness-Hauf pleaded guilty to Counts I, IV, V, and VI. Both parties agreed to a sentence recommendation of time already served and restitution.

Kozisek ordered concurrent sentences of 21 days in the county jail, with credit for 21 days served, on counts I, IV and V, a $100 fine on Count VI and $137 costs. She was ordered to pay restitution to Super Foods in the amount of $30.99 for stolen whiskey.