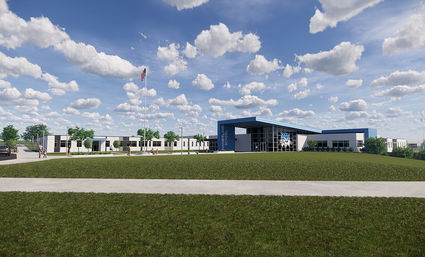 With last week's successful passage of the Summerland school bond, board of education members from Clearwater, Ewing and Orchard planned to meet Wednesday, Nov. 20, in Ewing, to start phase two of the consolidation and building processes.

Ewing Principal Greg Appleby said, "We have a lengthy agenda to discuss a number of items, including policy."

Dale Martin, superintendent of Nebraska Unified District #1, which includes Clearwater and Orchard, said a number of items need to be addressed for the process to continue, including, but not limited to, finalizing the reorganization petition, discussing the makeup of the new district's board of education and finalizing land acquisition.

The new pre-kindergarten through 12th grade facility will be situated near the intersection of 513 Avenue and Summerland Road, in rural Antelope County, between the three communities.

Ewing voters cast 360 votes in favor, with 38 against the building project.

In Clearwater, 332 voters approved the bond, with 103 against.

The closest contest was in Orchard, where 289 individuals approved of the new consolidation and school, while 230 voted no.

Each community voted on a proportional amount of the overall project cost, based on the percentage of the new district's valuation that each district represents.

The merged district's levy will include $0.516 for the general fund and 20.5 cents allocated for the bond, creating a total levy of 72.1 cents.

Appleby said administrators and boards were pleased with voter turnout.

"Everyone in the communities had opportunities to hear information and make an informed decision. It's good to see voters commit to the democratic process."

"This shows how close to people's hearts this is. The results show the opinion of the public," he said.

For approximately 60 years, talk of a cornfield school for the three districts have taken place, and for different reasons, failed to move forward.

Ewing has remained on its own for academics. It has been part of a football co-op with CWCE for four years.

Last spring, boards of education from the three communities approved the formation of the Summerland sports co-op for all sports, except football.

The 2020 football season will be the first year for the Summerland Bobcats.

Seeing people working together in the activities program made an impact.

This consolidation effort differed from past discussions, according to Appleby.

"There was a lot of positive momentum. People in all three communities got behind it," he said.

Martin said a combination of factors led to the consolidation discussion, including declining enrollment numbers, a push from the farm sector for a reduction in property taxes and people realizing communities and schools need to work together.

"It (consolidation) leads to efficient use of taxpayer dollars," Martin said.

According to data from the Nebraska Department of Education, Clearwater/Orchard spending per pupil currently runs $21,746.

Based on feasibility study numbers, the per pupil cost for the Summerland district is expected to drop to $15,786.

Efficiencies of this type are significant, according to Martin.

Construction is slated to begin in spring 2020.