Bobcats fall to Crusaders in state tourney opening round 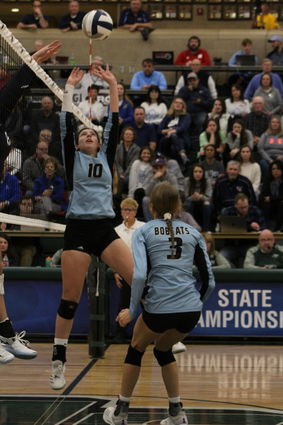 Tight set • Kyra Nilson (10) avoids contact with the net while sending the ball to Tiana Thramer during the third set of the Summerland - Grand Island Central Catholic match at state volleyball. The Crusaders swept the Bobcats, eliminating the local athletes from advancing to the second round.

The pace of the first set caused Summerland to be out of system, making it difficult for setter Kyra Nilson to get a set to her usual powerhouse hitters.

The Bobcats ended with 14 hitting errors and five net violations.

Throughout the match, Grand Island Central Catholic powered 10 ace serves over the net.

GICC's Courtney Toner went on a 5-0 run from the service line, pulling the Crusaders away from what started as a...