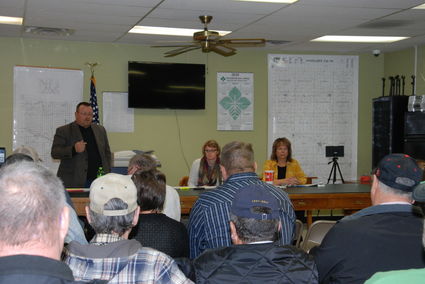 Two rural Clearwater women have been appointed to fill vacancies on the Antelope County Board of Commissioners.

Regina Krebs and Carolyn Pedersen fill board vacancies created by the Oct. 15 recall of commissioners Tom Borer and Allen Bentley, who were elected to the board last November.

Other candidates interviewed for the District Three seat included Patrick Meuret of Brunswick and Edmund Schindler and Don Zegers, both of Neligh.

Abler opened the interview meeting and explained the process to about three dozen county residents in attendance. He thanked the candidates for submitting applications.

"I was happy, with the number, I was afraid we wouldn't get too many of (them), just because of what has been going on in the county with the recall and everything else," Abler said. "As elected officials, we are all subject to that, we say recall process, and it's not a fun process...Thank you for wanting to serve Antelope County."

Starting with District Five, candidates were individually called to face the panel. Audience members were given the opportunity to comment in support of, or against, appointment of each and to ask questions of the candidates. The candidates then addressed issues brought up by the public, if they chose to, before being interviewed by the panel.

Several audience members directed questions to candidates and many voiced support for particular individuals, along with a few comments in opposition to appointment of an individual.

For the District Five position, Pedersen was the only candidate to draw supportive comments from the public, with five citizens speaking. No one spoke against her appointment. No one commented either way on the appointment of Braband.

Three opposed or questioned Heithoff's suitability for the job, with no one voicing support for his appointment.

Meuret had the most audience support for the District Three seat, with about a dozen citizens going on record to support his appointment. No one spoke in opposition. Two audience members commented in support of Krebs, while no one opposed her appointment. Two opposed appointment of Schindler, with one commenting in favor. No one commented for or against Zegers' appointment.

Topics of the panel's questions included how the potential commissioners would handle budget shortfalls, including what cuts would be made; the commissioners' role with other elected office holders, willingness and availability to attend various meetings; commitment to fulfill the remainder of the terms of office; intention to file for re-election as incumbents; and long-term goals for the county. They were also asked to explain beneficial experiences from previous jobs and describe frustrating experiences and how they were handled.

During the interview process, most of the applicants indicated a need to find additional revenue for the county and intentions to work together with other officials on budget issues, as well as being respectful of constituents and other officials. Zegers offered a suggestion that one of the five commissioners be on site at the courthouse each day to provide accessibility to citizens.

The interview process consumed nearly two and one-half hours before the panel deliberated another half hour, the bulk of it mulling the District Three appointee. Each panelist commented before making selections.

"I really did come into this with the best intentions of trying to pick the best candidate," Branstiter said. "I didn't think it was going to be this hard. Some people really surprised me here with their answers, they had really good answers."

"I came into this not really liking this process. By statute, I've got to pick two commissioners for Antelope County," Abler said. "I didn't know (about it being) open to the public, I am actually glad all our applicants stayed and listened to each other because they got the other candidates' perspective on how they could handle it...In a way, I like it now, I appreciate it...It's difficult, it's not an easy decision to make."

"Not only is experience valuable or invaluable to a lot of things, a person's character and their willingness to put theirself out there every day. We all work hard, whether we're an official or an employee in the offices," Payne said. "I feel there were people who shined in many areas today, of the applicants, and this is a very tough decision."

A motion by Abler, seconded by Payne, to appoint Pedersen as District Five commissioner, carried unanimously, after brief deliberation. She accepted.

All three panelists indicated they were struggling to make a choice between appointment of Krebs and Meuret. Branstiter pointed out Krebs' experience with state programs and economic development to bring revenue into the county. Payne cited help Krebs had given her in understanding budget preparation, although she said she appreciated public support for Meuret. Abler also noted the showing of support for Meuret and his answers to audience-raised questions, as well as Krebs' answers to "difficult" questions.

As discussion stalled, Abler asked if the panel wanted to recess for lunch or continue, reminding his co-panelists that any discussion had to take place while the meeting was open to the public. They opted to continue, with discussion also occurring on the possibility of taking a paper vote. Payne prepared and distributed hand-written ballots. After collecting them, she made a motion to appoint Krebs. Branstiter provided the second. Both voted yes and Abler voted no. Krebs accepted.

The newly appointed commissioners join three who were elected to the board last November, chairman Dean Smith of Brunswick, Charlie Henery of Neligh and Eli Jacob of Clearwater.

Both women have experience with Antelope County government. Pedersen served as county clerk for 12 years, while Krebs has assisted officials with budget preparation and, in her capacity as a certified public accountant, had been involved in audits of county in the past.

Krebs, who sat on the Clearwater Advisory Board of Education, planned to resign from that position following her appointment to the board of commissioners. She and her husband, Shane, are Clearwater area farmers. She owns and operates an accounting business in Neligh.

"The budgeting process in and of itself has been a frustration of mine here in Antelope County for a long time," she said. "It seems that we never even look at the budget, coming forward, until it's the middle of August and all of a sudden we have to make all of these decisions, and we don't have the time to really look at it on a department by department basis. The time to start the budgeting process in this county is now - is in March."

She said she understands the auditing process and can work to find answers to issues raised in audits.

"What you need to do is take that audit as its presented and you just need to work on each department, and that's where I can help the process...whether it's in the form of more questions, the right people would have to be in charge to do more income audit work, if you will, whether you bring in somebody external to do more of a feasibility type study, additional analysis."

"We can cut spending in a heartbeat, we will all be driving on gravel roads," she said in answer to an audience question regarding increasing budgets. "There's ways to do it, we can look at cutting staffing."

She said the role of a commissioner is basic oversight of all entities, the claims process, working with other officials and communication with the public.

Krebs' long-term goals include being proactive and not dictated to, especially by the state, and she is a proponent for economic development at all levels of government.

"Whether I'm the best person for the job or if you choose someone else, I'm available to help the county," she concluded. "I definitely want to see our area, our local area, our local economy, prosper.

Pedersen, resides at rural Clearwater as well, and with her husband, Boyd Pedersen, owns a family business, Boyd's Electric Service. 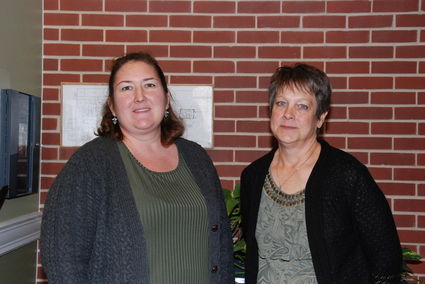 Regina Krebs (l) and Carolyn Pedersen will fill vacancies on the Antelope County Board of Commissioners.

"Everybody deserves to have an opinion, just because you think differently, doesn't mean they are right or wrong," she said. "They (commissioners) need to be open-minded and hear everybody out."

Pederson said her long-term goals as a commissioner include fighting to bring in additional revenue and to fight for county employees, who are a part of business, and she sees the county as a business.

To deal with budget shortfalls, Pedersen sees a need to prioritize road and infrastructure projects and recognizes it can't all be accomplished in one year.

She also said serving as secretary to the board of supervisors, during her years as county clerk, gave her insight into the duties of the commissioners.

"I am very humbled by the support that I have." Pedersen said at the conclusion of her interview. "Whoever you choose, I will respect that and support them."