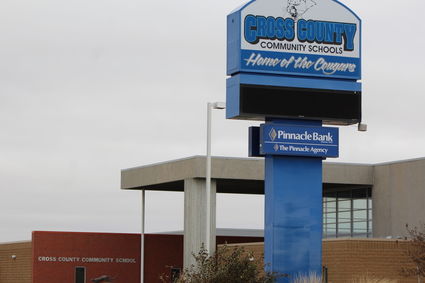 The observation, made by Cross County Superintendent Brent Hollinger, showcases how the idea of a cornfield school benefits educational opportunities and provides financial efficiencies.

Hollinger did not land at Cross County until the 2009-2010 school year, about two years after passage of a successful school bond and one year after the new facility was constructed.

"There were about a million things left undone when I came in," he said, but the message from the communities remained clear: education and efficiency were the primary goals.

What led to the new school?

Plenty of feasibility studies, according to Hollinger.

"At some point, a county-wide school with Osceola, Polk-Hordville and Stromsburg, near the 92 and 39 junctions, was considered," he said.

That feasibility study was shelved and each district was left to survive on its own.

Projections for enrollment showed a definite need to do something.

According to Hollinger, Stromsburg had an older high school facility but did not have a tax base that allowed them to generate revenue for improvements.

"Benedict had a lot of ground, a lot of money, but no kids," Hollinger said. "Two different schools with different needs."

The two districts consolidated in 2001 and maintained facilities in each town.

Hollinger said he has seen similar scenarios in other consolidations.

"What they end up doing is spending a lot of money on facilities and busing costs."

According to Hollinger, costs to each facility were running between $15- to $25,000 per month.

Because of efficiencies, Cross County has expanded some ed opportunities since moving into the original facility.

"We've grown because of some choices we've made," he said.

Some parts of the school were not included in the original design, including expansion of an ag program.

A $1 million ag building was added to the school, thanks to savings from the consolidation.

As option enrollment numbers grow, the school has increased room in the elementary facility.

Class offerings "doubled" what Stromsburg had.

"Benedict was a bare bones school. It was not a good scenario. They couldn't hire quality teachers."

Now, Cross County offers more classes across the board and has seen an increase in science, math, megatronics and robotics.

Hollinger said some taxpayers still feel taxes are higher than they were 20 years ago.

"Imagine what they would be if we weren't under one roof," he said. "If we were still trying to operate in both towns, taxes would be higher than they are."

Hollinger was also involved in a bond project at Southern Valley Schools, which consists of the communities of Beaver City, Edison, Hendley, Orleans, Oxford and Stamford.

Originally, a grade seven through 12 building was constructed and each town maintained an elementary.

"Around 2007, a bond passed to add an elementary addition to the 7-12 facility and instantly, the same thing happened," he said.

Hollinger noted, "Unless you build a PK-12 facility, you won't experience efficiencies you need."

The superintendent said one of the best opportunities the school has to provide is the chance to bridge an age gap but gathering everyone in one facility.

"Those 18-year-olds act differently around a five-year-old."

High school and elementary students pair to be Cougar buddies.

Students interested in elementary education work with teachers and elementary students as aides.

"We having reading groups where older kids read with primary. an endless story of how many neat things we get to do b/c our older kids are with younger kids.

In the 11 years he has been at Cross County, Hollinger hasn't had one experience where he wishes the seniors did not cross paths with the first graders.

"It's been successful," he said.

Other questions concerning consolidation include teacher and staff retention.

Cross County did not RIF anyone, according to Hollinger.

"We kept everyone," he said.

Some faculty members retired prior to construction; others retired after the project was completed.

A custodial staff of six keeps the building and grounds in tip top shape.

"We're still spending less money than when we ran three different facilities. It's not even close," he said.

In the years Hollinger has served as superintendent, the school has seen about a 60% turnover in faculty.

"When I came here, many teachers were at the end of their careers."

A Colorado family purchased the Benedict school and lives there.

Benedict's main street businesses did not decrease; however no new businesses have started.

Stromsburg had separate elementary and high school facilities prior to the new construction.

A "sales pitch" was made to town council members regarding the fate of the elementary building.

Eventually, it was demolished and 11 new houses were constructed on the nine acres.

"It's a neat scenario," Hollinger said. "The new houses increased the tax base. It's a win-win for everybody."

An individual from Florida purchased the high school.

The main floor was converted into a civic center.

Movies are shown and wedding dances held in the facility.

The second floor was renovated into a residence.

Business in Stromsburg is booming.

According to Hollinger, the business climate is "stronger than it was 10 years ago."

Several new businesses have started and maintain a healthy climate around the town's square.

Hollinger said Stromsburg residents were aggressive about maintaining and bringing in business opportunities.

"They brag about the school. It's a thriving town."

When you run a C2 school out in the middle of nowhere, you may think about being isolated and on your own. 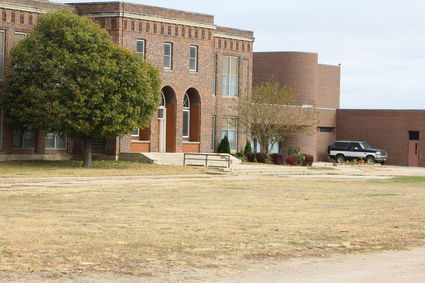 The former Benedict Public School building has been converted into housing for a family who moved to the area.

That's not the case, according to Hollinger.

During homecoming, students travel to both communities via bus to march in the streets and host parades.

Students visit the local care center and read with residents.

Community members appreciate the effort and the creative ideas the school employs to stay connected.

And, at the end of the day, students return to their communities.

He admits a lot of factors go into a decision to combine forces and resources.

"You have to look at more than five years. Look down the road at what will happen in 20 or 30 years. Look at what is in the best interest for students and ask yourself, 'How do we stay a quality school?"