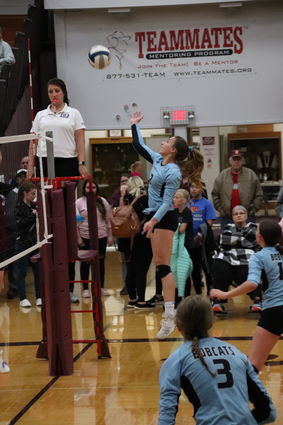 Roll over • Summer Schroeder tips the ball over a Warrior defender in the Bobcats five-set win, Oct. 10. Schroeder landed 7 kills in the match.

Summerland's Lady Bobcats advanced to 19-3 on the season following a five-set thriller with Neligh-Oakdale last Thursday in Neligh.

Four Bobcats finished with double digits in the kills' column.

Brenna Wagner and Ashley Koenig led the team with 14 hits apiece. Tiana Thramer ended with 13, while Sidney Stallbaum pounded a dozen to the floor.