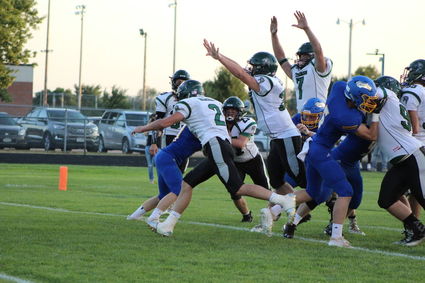 Put your hands in the air • Cyclone defenders Colton Thiele (middle) and Gage Switzer (r) block a Huskies field goal. The Huskies downed OC, 48-36, in a Sept. 20 game in Atkinson.

The OC Cyclones' attempt to spoil West Holt's homecoming game fell short, as the Huskies held on to claim a 48-36 win.

Instead, it became the Eli Macke and Tyler Larby show, as the two opposing players were involved in each scoring play for their respective teams.

The Sept. 20 contest was a physical battle that saw the Cyclones land in the endzone first.

Eli Macke scrambled 29 yards to put the Cyclones up 6-0. The PAT failed.

West Holt responded when Tyler Larby stepped in from the one-yard line. AJ Olson sent the extra point through the goal posts.

After a stalled OC drive, Larby lobbed at...