Renegades round up Wolfpack 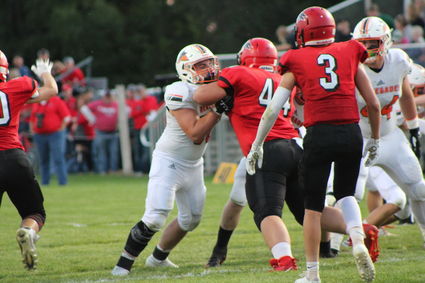 Hold the line • Trevor Stamp (l) controls an EPPJ lineman during the Renegades 39-14 win over the Wolfpack. The teams played Sept. 13 in Elgin.

After a defensive battle in the first quarter, CWCE powered their way to a 39-14 victory over the Elgin Public/Pope John Wolfpack, Sept. 13, in Elgin.

After eight minutes, the Renegades and Wolfpack were knotted in a scoreless contest.

Fran Ferran drilled the PAT through the uprights, boosting CWCE to a 7-0 lead.

Seven minutes later, the Renegades forced a safety, to go up 9-0.

Xavier Hobbs returned the kick to the Wolfpack 35-yard line.

Several three-and-out series followed, with neither team able to gain...