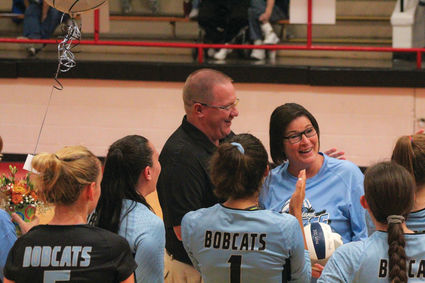 A Funk-led team has qualified for the state tournament six times and made five championship game appearances.

In 2001, the Tigers finished 11-12 and lost to Freeman in the first round of the NSAA State Volleyball Tournament.

The turnaround came in 2006, when the Tigers went 25-3, defeating Elba and Chambers at the state tourney before losing a four-set match to Falls City Sacred Heart in the finale.

In 2007, Ewing went undefeated, knocking off Dodge and Falls City Sacred Heart. In the state championship match, Paxton stained a perfect record with a five-set win.

Redemption came the next year when Ewing brought home the crown, capping a perfect 36-0 season.

At state, Ewing defeated Greeley Wolbach and Clay Center before sweeping Chambers in three in the final match.

Funk continued coaching and racking up the 'W's' until the end of the 2013 season, when she hung up the whistle for two years.

In 2016, Funk returned as the Tigers skipper and after a 12-14 mark in 2016, righted the ship, with back-to-back state championship appearances.

Ewing joined Clearwater and Orchard to form the Summerland Bobcats co-op this year.

Ewing Principal Greg Appleby said reaching the milestone is a great accomplishment for Funk and "a well-deserved milestone in her coaching career."

"Suz has been the coach here at Ewing and Summerland for 16 of the past 21 seasons and has averaged 20 wins per season over that tenure. That is remarkable," Appleby said.

Funk's son, Kray serves as an assistant for the Bobcats.

"She is a firm believer in hard work and fundamentals," Kray said. "She believes in putting in the work in the off season."

Appleby said, "Playing for Coach Funk is not easy and requires players to work extremely hard, be committed to the team, be disciplined, be dedicated, and be coachable; but the reward is often great in team and individual success and in the relationships built when a team becomes one."

That's been evident this year as the Tigers and Cyclones combined to create a new team.

What's unique about this team?

Funk doesn't know if her squad is unique, but credits their success to other factors.

"I hope that it's respect for each other."

Funk said, at times, a coach makes adjustments to fit the athletes on a team and both coaches and players have to be willing to do that.

"The passion that the coaches and players have for the game makes them want to be the best they can be. We work very hard in the off season and in practice daily to become better. It's been a great unity for these young girls and we are very proud of the way they have come together," she said.

Appleby said Funk has high expectations for herself, her assistant coaches, and her players.

He said, "She gets great results out of her teams and she is respected by her players for her dedication to the program."

Appleby said Funk believes in the team over everything else and she would also be the first to give credit to many of the great assistants she has had over the years, including this year's assistants, Kray Funk, former player-turned-coach Sierra Summers and Karri Hickey.

Kray said what sets Suz apart is the way she incorporates life skills into volleyball.

"Be on time, work hard in the classroom, and when you put on that jersey, you represent this team and not yourself," Kray said. "I'm very proud to call her coach and mom."