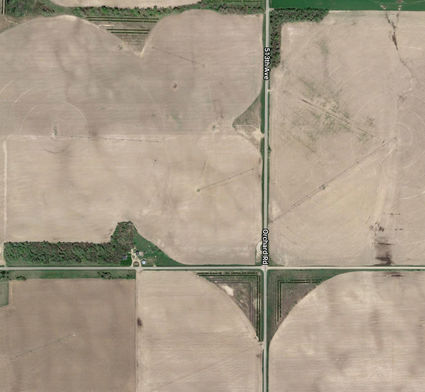 A new PK-12 cornfield school came one step closer to reality Aug. 21, when Clearwater, Ewing and Orchard boards of education unanimously approved entering into a purchase agreement for approximately 40 acres of land near the intersection of 513 Avenue and 857 Road, contingent on passage of a bond issue in all three communities.

According to Clearwater and Orchard Superintendent Dale Martin, the site "is about as centrally located as we could get," sitting six miles south of Orchard, seven miles east of Ewing and seven miles northwest of Clearwater.

Initially, two tracts of land were identified as possible sites. The second tract sits diagonally southeast across the intersection from the approved location.

Martin said either site could have worked, but one owner expressed more interest in selling.

Landowner Russell Napier agreed to sell the parcel at the appraised price of $5,552.63 per acre.

Prior to the vote, Orchard board member Kristi Schutt asked if funds for the land acquisition will be included in the bond.

"It can. It just depends on how you want to structure it, but a lot of times, it is right in the bond. Sometimes building fund monies are used," Martin said.

After a presentation of school concepts by Jacob Sertich, of Wilkins Architecture Design Planning, of Kearney, the boards selected to move forward with a multi-level facility, projected to cost $34.2 million.

Two advanced for presentation to the joint boards.

"I think we have a great opportunity with this parcel," Sertich said.

Since the elevation along Summerland Road (857th Avenue) is higher than the northern end of the parcel, "It gives us a great opportunity to develop a two-story scheme and concept. It gives us the opportunity to really be efficient with the allocation and the earthwork activities," Sertich said.

"At this point, we're more concerned with price per square foot of a facility ... there's really a $1 difference (per square foot) from one facility to the next," Schendt said.

How will projected cost affect a bond issue?

Tobin Buchanan of First National Capital Markets said the current bond market is yielding about 2.5% interest on a 20-year bond.

Buchanan said, in order to have a common levy for the potential new district, proportional valuations need to be calculated.

In order to have a common bond levy and common overall levy, the Orchard district's ballot will need to represent a bond size of $15.1 million, Clearwater's, $10.1 million and Ewing's, 9.75 million.

Buchanan said. "That spreads that amongst each district's valuation to make sure the levies at the end are all the same. The number is different, but the way it's spread out and dispersed amongst the taxpayer's valuation may get, in the end, equal."

A potential levy for a new combined district could total 72.1 cents, with 51.6 cents allocated to the General Fund and 20.5 going toward the bond.

"What's a little tricky is I don't know what your new tax levies are going to be," Buchanan said. "We want to compare new potential overall levy to the current levy they will pay in the next fiscal year."